Cristiano Ronaldo’s So Obsessed With Perfection That He Chooses What Teammates Eat, Forces Players To Train Late 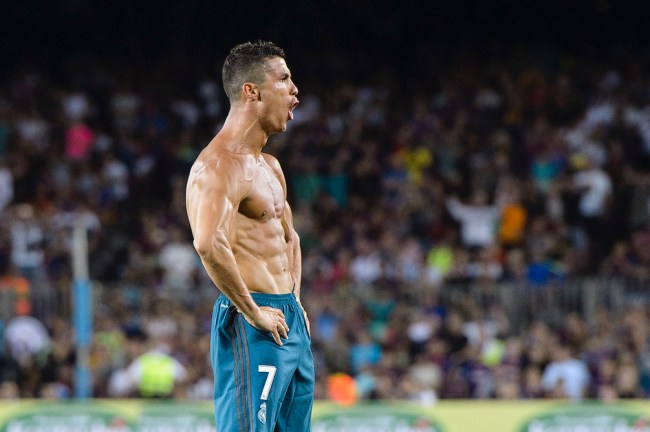 Take one look at Cristiano Ronaldo and it’s easy to see that the 35-year-old superstar works his damn ass off. He doesn’t just have a six-pack, he’s got an 8-pack. He doesn’t have strong quads, he’s got quads the size of two baby dolphins. He doesn’t have muscles, he has lean muscles that most of us didn’t even know our body could have.

Given his work ethic and desire to be great, it’s no wonder Cristiano has reached the level he has in both his sport and as a global icon. The Portuguese national team captain may not have all the team awards one might expect for such a star, but he does hold numerous individual honors, and, when all is said and done, the dude will be remembered as one of the flashiest, most talented, skilled offensive players ever.

With his passion to be great, Cristiano Ronaldo’s obsession doesn’t just stay internally. In fact, according to The Sun, the guy expects just as much from his teammates, and he pushes them to make sure they’re holding up their end of the bargain. So much so that Cristiano allegedly dictates the meal plans, and often keeps his mates after-hours to train with him.

“He trains like an animal, he doesn’t know when to rest and he encourages you to give your all,” he said. “He always tells me what to eat, not leaving anything to chance.”

Arthur Melo has a unique view on all of this because he’s played with both Lionel Messi and Cristiano Ronaldo, perceived to be the two best players of their generation. The fact that he mentions CR7 as the guy who “trains like an animal” goes to show just how head and shoulders he goes to be great.

Another teammate of Cristiano’s, Patrice Evra, took it a step further, telling ITV in 2019 that anyone invited to Ronaldo’s house should be fully prepared to workout… hard.

“I would give advice to anybody, when Cristiano invites you for lunch at his house, just say no.

“He once said, ‘Patrice, come over after training.’

“I went, you know I was really tired, and at the table there was only salad and plain white chicken so I was like, okay, and water, not any juice. We started eating and I was thinking some big meat would be coming after that but there was nothing. He just finished and he stood up and he started playing with a ball, doing some skills and he said, ‘Let’s do some two-touch.'”

Evra added: “I was like, can I just finish eating? He said ‘No, no let’s play two-touch.’ We start playing two-touch. After that he said let’s go to the pool to swim, I was like okay… after going in the jacuzzi, the sauna, I’m done.”

Uh, yeah, there’s nobody on the planet like Cristiano Ronaldo. Who knows if he’s doing things like this every single day, but, assuming he does, sheesh, talk about obsessed. It’s so bad that his own girlfriend, model Georgina Rodriguez, once said that she even feels “ashamed” to train with him.

A lot of people may look at Cristiano as being the worst for being so demanding of his teammates, girlfriend and, well, everyone around him. But, like Michael Jordan and Kobe Bryant — who both had a legendary work ethic and often pushed teammates to their limits during practice — this is the type of stuff that separates good from great from legendary.