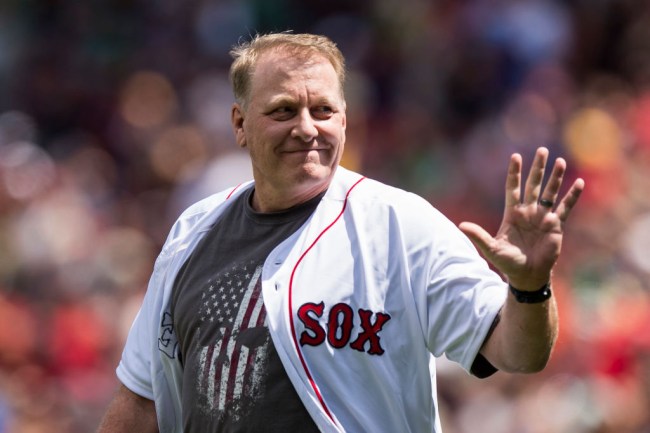 Several players from the 2004 Boston Red Sox World Series team that remains among the most beloved Boston sports franchises in history were honored before Game 2 of the World Series last night. Pedro Martinez, David Ortiz, Kevin Millar, Tim Wakefield, and Allen Embree were among the players who threw out the ceremonial first pitch.

Curt Schilling, who ended the 2004 regular season with an astounding 21-6 record (second in Cy Young balloting) and whose bloody sock from the ALCS now resides in Cooperstown, was not in attendance, despite living in the area.

“We did not reach out to him,” a Red Sox executive told Dan Shaughnessy. “It is not out of spite. It was originally just going to be Pedro and David and Wake and Millar, but we heard from a few others and they are included,” the executive said.

This was completely out of spite, and Schilling’s wife, Shonda, knew it.

“Made much more sense to fly 6 men in and not the one that lives 15 miles from the ball park,” she said.

The uber-conservative’s post-playing days have been marred with controversy, once calling Hillary Clinton a “skank” and “murderer,” claiming that ESPN has the most racist employees in sports, and alluded to lynching journalists. Schillings views fly in the face of an organization that refused to go to the White House after its 2004 World Series victory, under the Bush administration.

In a long-winded Facebook post, three three-time World Series champion rips the ‘weak men’ in the Sox organization who have distanced themselves from him over the years.

What they did, or did not do, tonight was done 100% on purpose and completely expected.

Were my feelings hurt? In one sense, yes, not being able to be on the field with the men who I will always share that 2004 bon with and not being able to once again thank the folks who paid for the tickets and whose lives changed with ours sucks .
But ANYONE that knows me knows that no matter what you think of my beliefs and integrity and my word, anyone that knows me knows how I feel about them. They are, in my opinion, the core of a man.

White privileged rich “men” hate me? People, who have and will again ruin others lives to make themselves appear flawless? People who’ve never broken a sweat, cried and or bled for something bigger than themselves think ill of me? I think that’s exactly what my father would have wanted from me as a man, husband and father.

I will sleep soundly again tonight because I know what I did in 2004, the men on that field know what I did.
Most importantly? The men who sit in that ivory tower and pass their judgment from on high know EXACTLY what I did and it shames them as men knowing they’ll never in their lives be able to do anything remotely close to that.

I can wake up tomorrow and peek at the 3 WS Trophies, or put on the 3 WS Rings and know what was and is. I don’t need a ceremony to know what we did that year.

I believe to this day that year made all the subsequent years possible and ONLY that group of men could do what we did.

I just didn’t get an invitation from a few weak ‘men’ who’ve spent their entire lives paying and watching other men achieve.

There’s no denying that Schilling’s contribution to that team was immense, or that the Bloody Sock incident was one of the great stories in Boston sports folklore. It’s gotta sting Schilling hard to know that the organization refuses to acknowledge for the mere fact he can be a bumbling buffoon.