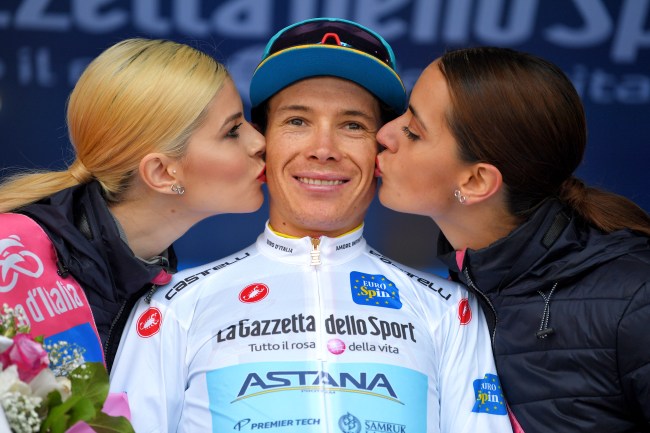 There are bad days, and then there’s getting bitch slapped by a dude in spandex shorts and the video being streamed all over the world.

That’s the day a spectator had at the Giro d’Italia on Saturday as he single-handedly derailed 25-year-old cyclist Miguel Angel Lopez’s chances of securing the young rider’s classification jersey when he collided with him during the penultimate leg of the 21-day segmented race.

The fan was running alongside Lopez on the side of the road in the final three miles of the 20th stage when he crossed paths with the Colombian cyclist, sending Lopez over the handlebars.

Cameras captured Lopez whacking the fan a couple times in the head, sending his hat flying before getting back on his bike.

Who says cyclists 🚴🏽‍♂️ aren't still on roids? 💉 Props to Miguel Angel Lopez for laying down some bike race justice on this idiot fan who got onto the course at the #GiroDeItalia2019 pic.twitter.com/HF2vMMJHtl

Lopez ended up losing about 30 seconds of time and finished 18th on stage 20. He crossed the finish line 1:49 after the race winner.

After the race, Lopez expressed regret for the incident to the AP:

“I’m sorry for what happened. I was full of pure adrenaline. But there needs to be more respect for the cyclists.”

Giuseppe Martinelli, the sports director for Team Astana, didn’t have nearly as much sympathy for the fan.

“I’m only sorry that he didn’t give the spectator some more punishment. He deserved it for what he did.”

Surprisingly, Lopez was not punished for slapping the fan, as it was deemed a “human reaction.”

Here's a better angle of Miguel Angel Lopez interacting with a fan on the lower slopes of Passo Croce d'Aune-Monte Avena pic.twitter.com/BbyGMCOF6R