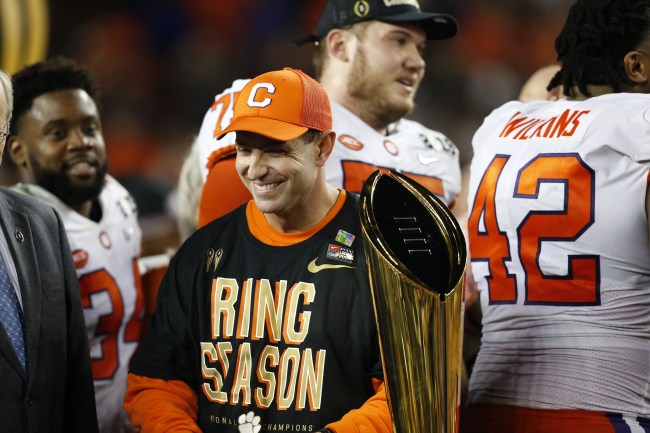 Dabo Swinney is coming of his second national championship in three seasons, winning both with two different quarterbacks — first Deshaun Watson and then with Trevor Lawrence — but, apparently, the Clemson Tigers head football coach has dreams of suiting up another powerful beast back there: Zion Williamson. But, c’mon, given how dominant and freakish of an athlete as Zion is on the basketball court, why wouldn’t Dabo at least joke about starting the freshman on the gridiron.

As a guest on Duke head coach Mike Krzyzewski’s radio show today, Dabo Swinney joked about the prospect of Zion Williamson wearing pads and a helmet for Clemson, not only admitting that he’d play him at quarterback, but he’d move him around a little bit and let him run rampant at other positions, too. Here’s what Swinney had to say on the topic, per ESPN:

“I’d put [Williamson] at tight end or wideout or [defensive] end or wherever he wanted to play,” said Swinney, per a clip released by Duke of the show that will air on ESPNU Radio at 6 p.m. ET Thursday. “We might even put him at quarterback.”

Swinney responded: “Put in the Wildcat, no doubt.”

That’s a very smart man, right there, so it shouldn’t be a surprise that Dabo Swinney’s won two national titles in three years. I mean, the dude knows how to evaluate talent, so, even though this was just a joke, you’d have to imagine Zion Williamson would be a beast out there on the football field. You can listen to parts of the interview below.

Dabo Swinney and The Goat discuss. 🤔🤔🤔🤔

For what it’s worth, Zion Williamson has never expressed any interest in playing football, but that hasn’t stopped people from asking about how he thinks he’d perform in a different sport. And, according to the ESPN piece, there were two factors in preventing Zion from playing football in high school — and they were pretty big reasons:

“I didn’t get this size until my junior year of high school,” Williamson said. “And my [high] school doesn’t have a football team.”

Even though Williamson never suited up for a football game in high school, another major college football coach shared the dream of Dabo Swinney, as LSU Tigers head coach Ed Orgeron reportedly offered Zion a football scholarship in high school with hopes that he might be interested in playing tight end in Baton Rouge.

“I thought, ‘Hell, why not, he’s probably the best damn tight end to ever live,'” former LSU tight ends coach Eric Mateos told ESPN. Mateos said that Ed Orgeron told him to find the “best athletes in the country,” and Williamson was on that list.

As someone who has met Dabo Swinney before, the guy is full of good energy, passion and fun, so, while he was just playing around with Zion’s head coach Mike Krzyzewski, there’s got to be a little bit of truth to him wishing the monster-sized hoops player would’ve at least considered a football career once. Who the hell wouldn’t want to see that?