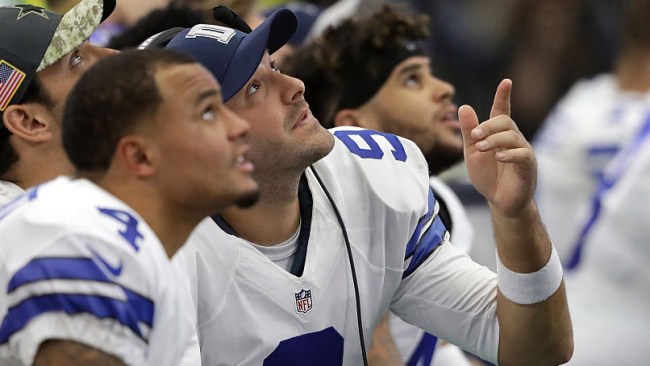 Even if you hate watching the Dallas Cowboys, you might want to tune in for their game against the Kansas City Chiefs.

That’s because the game will be broadcast on CBS and guess who will be in the booth? The all-seeing, all-knowing Tony Romo.

As NFL fans know after seeing clips like the one above, Prescott has a pretty good right to be concerned. Romo, who has been eerily prescient when it comes to calling which plays teams will run before they even happen this year, is still very familiar with the Cowboys’ playbook.

Speaking to the Dallas Morning News, Prescott had this to say about Romo’s penchant for prediction…

“Hopefully he doesn’t call out and guess too many of our plays,” Prescott said. “He’ll still be very familiar with them. Hopefully he can stay away from that this week.”

Romo has been critical of players at times during his first season calling games. It’ll be interesting to see if he’s the same way Sunday, his first time in the booth during a Cowboys game.

How does Prescott feel about Romo potentially being critical of his play?

Yep, this is going to be very fun to watch.

Heck, if Romo is smart enough to decipher even what Bill Belichick does…

…just imagine what he will do when he has a deep knowledge of one of the team’s playbooks in his back pocket.