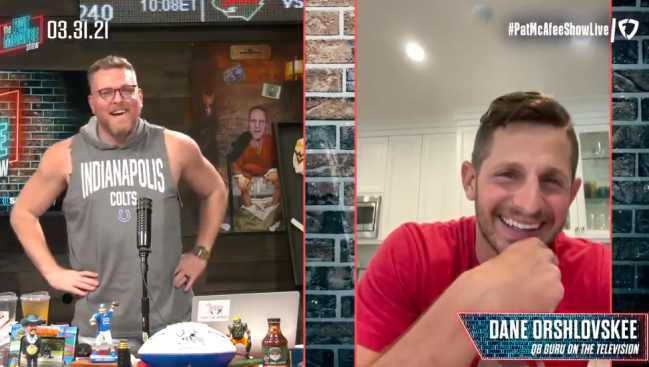 Back on March 12, Pat McAfee announced on his show that ESPN had banned its personalities from appearing on the show moving forward. It caught McAfee, his crew, and anyone that pays attention to the sports media world off guard, especially given the fact that McAfee regularly featured ESPN employees on his show. Plus, McAfee has done play-by-play and appeared on multiple shows for the four-letter network over the past couple of years.

It turns out that ‘ban’ wasn’t all that serious, as Dan Orlovsky made a surprise appearance on the show on Wednesday. Orlovsky, or Orshlovskee as McAfee calls him, seemed to be excited to jump on the show again, he even showed up in a Bowser mask. He also revealed that he had been in touch with McAfee about getting back on the show, so it seems to have been in the works for a little while.

Shortly after McAfee revealed that ESPN was keeping its employees from appearing on ‘The Pat McAfee Show,’ ESPN issued a statement saying the network was “in the midst of figuring out the best process for future guests to appear on outside platforms and Pat will continue to make regular appearances on ESPN shows.”

Now, you may be thinking that perhaps McAfee’s sources on the matter were wrong or that he even made up the ESPN ban, but why on Earth would he do that? Plus, he went weeks without any ESPN personalities appearing on the show, so it checked out.

Orlovsky didn’t just show his face and make small-talk with McAfee during his appearance either, he dropped a bit of a bomb regarding Justin Fields and his draft stock. He revealed that he’s hearing Fields is a ‘last one in, first one out’ kind of person and perhaps the reason his draft stock appears to be dropping is that some teams aren’t sold on his passion.

Numerous media people are being told by numerous decision-makers that they aren't sold on his passion, could all be bullshit though #PatMcAfeeShowLIVE pic.twitter.com/mYFnrMm8XZ