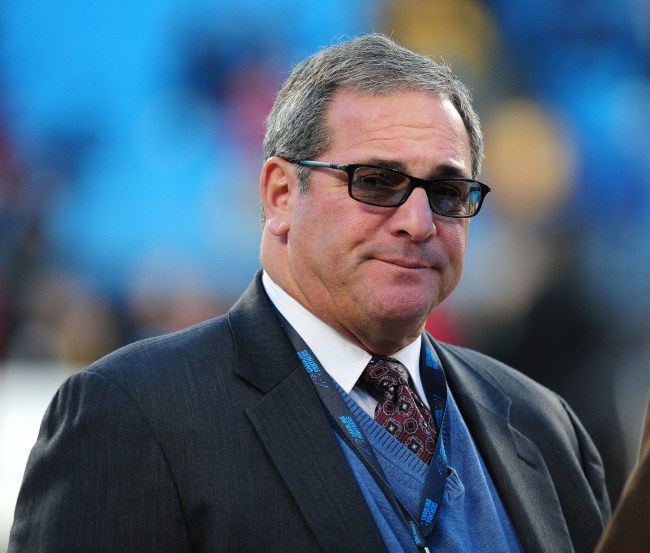 David Gettleman recently became a household name for making the most mind-bending pick in NFL Draft since the Bengals chose Akili Smith in the 1999 Draft.

The New York Giants general manager selected Duke quarterback Daniel Jones with the 6th overall pick in a decision that resulted in hundreds of broken televisions in the Empire State.

Gettleman declared Jones, who many evaluators had as a third-or-fourth round talent, “the right kid for us,” an opinion fueled by Gettleman watching Jones play for three series at the Senior Bowl.

The former Carolina Panthers GM does not care about armchair quarterbacks and is evidently not afraid to make controversial decisions to steer the wandering Giants back to their winning ways.

Gettleman said as much to NBC’s Peter King:

“In three years, we’ll find out how crazy I am.”

“The bottom line is, I have confidence in what I do and who I am. I’ve been a part of organizations that had pretty good quarterbacks—Jim Kelly, John Elway, Kerry Collins, Eli Manning, Cam Newton. I’ve led a charmed life with the quarterbacks on the teams I’ve worked for. I know what good ones look like. The other thing is, résumés matter. Every once in a while, I wish the people taking the shots would take a minute to look at my résumé. I’ve been a part of teams that went to seven Super Bowls. I had a hand in some of them. But today, there’s no patience. And there’s no room for civil discourse in our society, which I find sad.”

Gettleman had his hand in the two Giants Super Bowl victories against the Patriots in his role as the pro personnel director. In a sense, he is absolutely right about social media mobs trying to preemptively write history. The NFL Draft is far from an exact science and if it was, Chad Pennington would have never been selected before Tom Brady.

With that said, I wouldn’t trade Giants fans breaking down before this dude puts on a uniform for anything in the world.

With the 6th pick the Giants select …let my entertainment begin. Hahahahahahhahahahah thank you Gettleman. I didn’t think you could be hated anymore. #giants pic.twitter.com/iFtk66snyb