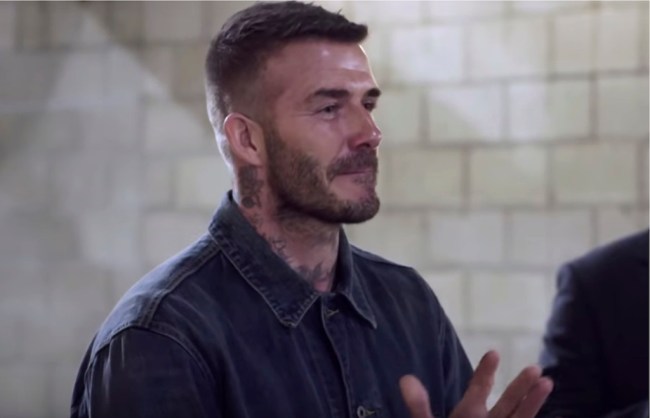 David Beckham is an absolute legend, which is why the Los Angeles Galaxy recently honored the former soccer great with his own statue outside of their home arena, Dignity Health Sports Park, before the club’s first game of the new season on March 2. Prior to the unveiling of that actual statue, though, The Late Late Show‘s James Cordon wanted to have a little bit of fun with Beckham — and he pulled an epic prank that Becks’ probably won’t forget.

Creating a fake statue to show David Beckham behind-the-scenes before it was displayed for fans outside of the Galaxy’s stadium, Cordon said he looked for “the right balance between realistic and absolutely terrible.” The result was, well, exactly that, because the David Beckham statue rolled out looked like it had been beaten with an ugly stick. Naturally, the reaction from the soccer star was incredible, as he thought it was the real thing that would be built. Take a look below at the entire prank.

Now, back in the day, David Beckham probably wouldn’t have fallen for such a monstrosity of a statue. But we all remember that Cristiano Ronaldo statue that made him look like an ogre with a F’ed up face, which had to have been going through Beckham’s mind after seeing the one Cordon carved up for him.

To his credit, Beckham did try to play it as cool as possible, giving an awkward smirk after the tarp revealed the statue while giving a courtesy clap. But he wasn’t too thrilled with the thing, as evidenced by his comments after it sunk in that this was supposed to be representing him.

“It’s slightly different than what it was when I saw it in Chicago,” Beckham said. “I mean, look at my chin. It doesn’t really look nothing like me. I mean, look at my eyes. The only thing that’s good is that hair and that’s about it.

“I really don’t see how this can go out,” a distraught Beckham continued. “Look how long my arms are. I honestly look like Stretch Armstrong.”

Towards the end of the video, a forklift “accidentally” knocks over the hideous statue, leaving David Beckham relieved, which then led to James Cordon coming out and revealing that it was all just a good ol’ fashioned prank. Classic work here from The Late Late Show host, because he got Becks good.