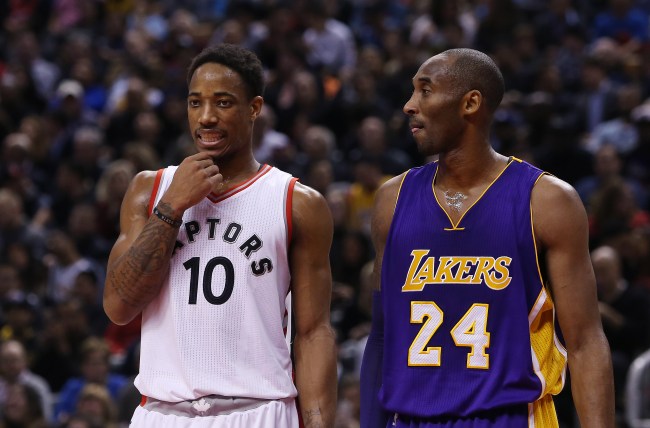 DeMar DeRozan grew up in Los Angeles and watched the Lakers play a lot, so, as a Kobe Bryant fan who had known the superstar for 16 years before his tragic death on January 26, the current San Antonio Spurs forward would find ways to pay homage to his favorite player once he was in the NBA. One of the ways DeRozan did so was donning a pair of Kobe’s signature Nikes during games.

While lots of NBA players do something like that, one of the unwritten rules of the league is to never, under any circumstances, wear the signature sneaker of the player you’re about to play against. We saw this a couple years ago when Warriors All-Star Draymond Green demanded his teammates stop wearing LeBron James’ shoes, because it’s a sign of admiration more than competition; which makes plenty of sense. After all, if I know a guy’s wearing my kicks, I’m going right at him to try to embarrass him, because, mentally, I know I’ve already got you beat.

In DeMar DeRozan’s case, he wore a pair of Kobes every single game. But when it was time to actually go head-to-head against Bryant in a game early in his career, he opted to swap them out for a pair of Air Jordans. As you might imagine, this didn’t sit well with Kobe, who took notice of the change.

Talking to former NBA players Nate Robinson for B/R Kicks, DeRozan described Bryant’s reaction, telling a hilarious story about how the former Lakers star was “mad as a motherfucker.” Take a look below.

.@DeMar_DeRozan tells the story of when he wore Jordans against Kobe

“Soon as he walked on the court, he was mad as a motherf–ker” 🤣 @brkicks

“I learned when I was a couple years in the league. If you played a person, you wouldn’t wear their shoes,” DeRozan said during a conversation with Robinson. “I always wore Kobes bro, but whenever [the Raptors] would play the Lakers, I didn’t wear them, right?

“So there was one game that I didn’t play in them. We’re playing the Lakers in Toronto. I said ‘man, f*** that, he ain’t about to kill us. I can’t have his shoes on and I’m guarding him. So I wear some Jordans. Jordan 10s. As soon as he walks on the court, he was mad as a motherf***er.”

Just when you thought Kobe Bryant couldn’t have been more ruthless, DeMar DeRozan explains how another man not wearing his signature shoes would make him mad, with the five-time champ clowning the young player for making the switch to Air Jordans for a game. It’s these types of stories that continue to prove why Bryant was an absolute legend, and always found something to try and get a mental edge on his opponents.