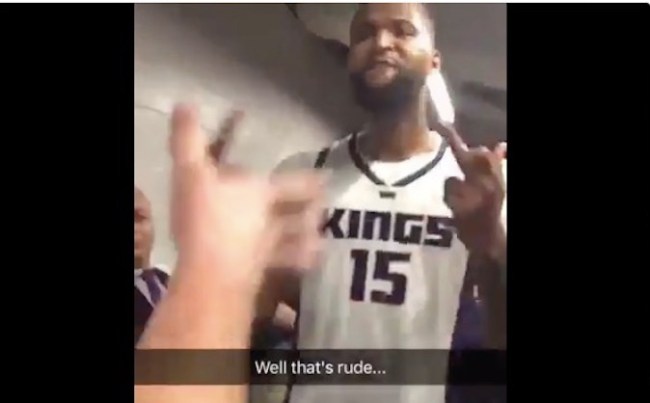 If you missed the Kings beat the Warriors in a 109-106 overtime thriller Saturday night, it was as good a regular season game as they come. Steph Curry went off for 35 points but was bested by the brilliant performance of DeMarcus Cousins who finished with 32 points, 12 rebounds and 9 assists.

After Sacramento handed Golden State its eighth loss of the year and snapping a 13-game losing streak to the Warriors, Cousins was particularly hyped on his squad.

“You never know with this team,” Cousins said. “I love every guy on this team and I wouldn’t choose another group to go to battle with. This team is full of fight, full of heart and we showed it tonight.”

While heading back to the locker room after the electric win, Cousins spotted a fan in a Warriors jersey (with no undershirt, may I add), and shoved him in a locker, metaphorically speaking.

Love this. Can’t stand when fans of the opposing team try to kiss ass after the game they were just booing you through. I wouldn’t have minded Cousins taking it up a notch and delivering this dude a nice hearty bitch slap.

Cousins open hatred for the Warriors has seemingly sparked from the Kings social media account, who trolled the other Western Conference All-Stars by misspelling their names as a sign of disrespect. SOCIAL MEDIA BEEFS!

RT if this should be the Western Conference starters