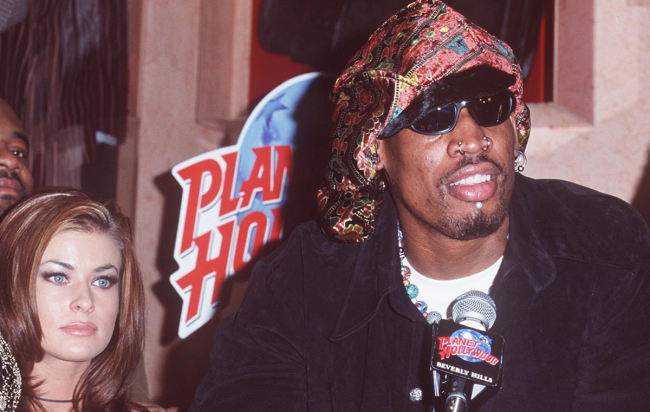 One of my favorite hypotheticals concerns the one athlete you’d pick to party with during their prime.

There are plenty of options to choose from, whether it’s crushing some Hooters with John Daly while throwing back Bud Heavys and chain-smoking Marb Reds, trying to go beer-for-beer with Wade Boggs on a cross-country flight, or dropping $100 on Taco Bell and smoking an ungodly amount of weed with J.R. Smith.

However, as far as I’m concerned, there’s no evening that would be more memorable (assuming you’d be able to remember it), than hitting the town with Dennis Rodman.

Last year, one of Rodman’s former teammates revealed he once needed over a week to recover from what he subjected his body to when they spent the night at a bar, and I suspect most people who got hammered with The Worm—including Kim Jong-un—probably hated themselves a bit when they woke up the next morning (or, in all likelihood, the afternoon.)

Rodman’s love for going hard rivals James Harden’s affinity for strip clubs and Lou Williams’ appetite for the chicken wings at strip clubs. While one very scientific study suggests Harden’s predilection for making it rain has hindered his performance and Williams’ hunger led to a $150,000 fine and 10 days in quarantine, Rodman’s penchant for partying never seemed to serve as a hindrance, as he once left a strip club at 5 a.m. on the day of a game and still managed to grab 20 rebounds.

In fact, it seems like his love of nightlife actually played an instrumental role in helping him thrive on the court, as Phil Jackson once let him fly to Las Vegas in the middle of a playoff series to let loose, a story Rodman recounted when I got the chance to talk with him a couple of years ago.

Prior to that conversation, I made my way through I Should Be Dead By Now, Rodman’s2005memoir where Sin City served as the backdrop for more than a few incidents, including the time he found himself in the hospital after drunkenly attempting to pull off a wheelie on a motorcycle as well as the night he and Carmen Electra got married at a chapel located next to his favorite strip club in 1998.

Electra is also at the center of many of Rodman’s craziest stories, including the time the two of them got it on in the Bulls practice facility and the night she had to hide after Michael Jordan burst into their hotel room, which she recounted in The Last Dance.

However, there’s one other incident involving the duo and a hotel room that has somehow managed to fly under the radar despite being possibly the best Dennis Rodman tale you’ll ever encounter.

In 1999, Rodman was in Florida shooting a movie with Tom Berenger and Stephen Baldwin that you’ve likely never heard of for reasons that should be self-explanatory when you consider the people who starred in it. While the filming took place in the Everglades, Rodman decided to spend his nights in Miami, where he set up shop in Room 302 at the Bentley Luxury Suites Hotel in South Beach.

On November 6th, Rodman and Electra were both arrested after police were called to the room early on a Friday morning after receiving calls that the two of them were fighting over what they both described as a “misunderstanding.” However, if Rodman’s account of the events is to be believed, the incident can be traced back to Electra’s decision to put a piece of pasta in a place where pasta should never, ever go.

In the book, the former Bull said he arrived back at the hotel at 4:30 A.M. after a long night with Electra, “Herr Jägermeister,” and his longtime handler Thaer Mustafa before promptly passing out, at which point Electra (who apparently wasn’t intimately familiar with the concept of “consent” at the time) decided there was no better time to experiment with something she’d been wanting to try out for a while: butt stuff.

Here’s what went down:

She found this box of pasta—penne pasta—in this gift basket that had probably been there for years. Thaer was still saying, “No, you’re not—this is a really bad idea.” But she was saying, “Yes, I am; he never lets me do this to him.” Now all of us have things we will and won’t do, like and don’t like in bed. And sometimes you and your partner just have to agree to disagree.

That’s the way it was with Carmen and me—until then. The woman is on record as saying I have “a nice butt.” A little too nice apparently. For whatever twisted reason, Carmen would occasionally ask me to let her—“Won’t hurt a bit!”—shove things up my “nice butt.” But I was like, “No. No. No. Homey don’t play dat.”

My life-long policy has been, if you’re going to be inserting anything in Dennis Rodman’s butt, it best be in a hospital setting, and involve a fistful of K-Y Jelly and a board-certified proctologist. Carmen was like, “Whatever.” So the woman takes this piece of penne pasta—this uncooked, hard edged, penne pasta, a couple of inches long—and sticks it where the sun don’t shine. Well now, I felt that sharp edge in my tender parts, and I came out of that bed flailing. “What the f—k?”

From there, all hell broke loose, as Rodman says he reflexively threw Electra off of him, sparking a series of events that led to him throwing a purse at her and her $25,000 Rolex somehow flying over the balcony

Both of them were eventually hauled off to jail and each hit with domestic battery charges that were ultimately dropped a few weeks later, and while their marriage may not have lasted, this story will live on forever.