Dennis Rodman Once Partied In A Gentlemen’s Club Till 5 A.M. And Then Grabbed 20 Rebounds Later That Day 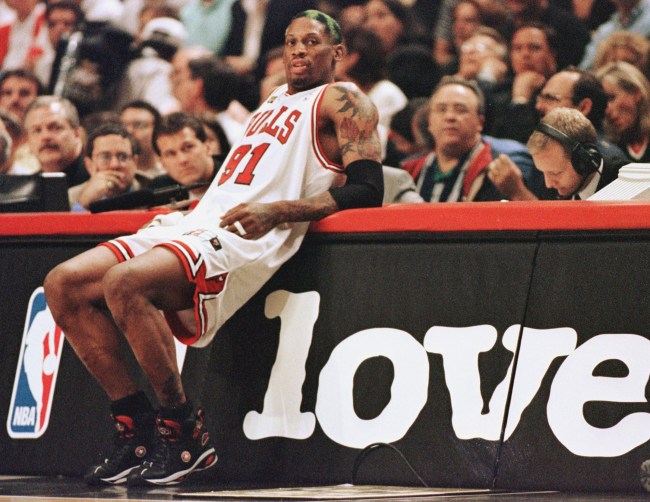 Dennis Rodman was one of the most extreme and eccentric athletes of all-time; and we’re getting a reminder of that currently with wild stories about him during his playing days thanks to the ESPN documentary The Last Dance, which details the final championship season of the Chicago Bulls in 1997-98.

With Rodman being a major focal point of that Bulls’ team that won a second three-peat after Michael Jordan‘s brief retirement during the 1994-95 NBA season, one of the most recent episodes of the aforementioned documentary spent time detailing some of the insane escapades that Dennis Rodman went on during his time in Chicago. Among them were flying to Vegas for 48 hours and, while there, being pulled out of a hotel room by Michael Jordan that included a bed with Carmen Electra in it — which is pretty nuts.

But there’s another story of Rodman that is just as crazy, and it was recently told by former NBA player Kendall Gill.

Speaking as a guest on the Bulls Talk Podcast, Gill detailed a time he said Rodman was partying at a gentlemen’s club until five in the morning on a game day, and, while some of “The Worm’s” opponents were beat from staying out so late, Rodman still had all the energy in the world during the game, even going out and grabbing 20 rebounds after his late night. Take a look at Gill recounting the story below.

“So, I was at Scores with Dennis and Jack [Haley], and I ended up leaving ‘cause we got a game the next day. I gotta get some rest right?” he said. “So I end up leaving about 12:30, which is kinda late for me, but I knew one of the girls there. Actually, I knew several of them. But one in particular, I said, ‘Listen I’m gonna call you in the morning. I want to know what time Dennis left.’

Gill said he went back to give his “scouting report” to his teammates. He thought his Nets would have the advantage in the game over Rodman.

Wishful thinking. Gill said that Rodman had about 20 rebounds that night.

“Runs like a racehorse,” Gill said of “The Worm.”

Good grief, Dennis Rodman was an absolute savage. The guy partied harder in a night than most pro athletes do their entire careers, and still ended up with five NBA titles and a Hall of Fame induction. You know how some people are just built differently? It’s safe to say Rodman classifies as being way different.

As one of the most intriguing and interesting athletes of all-time — despite what Bill Simmons may think — the stories of Rodman are legendary AF. And while he’s always been a mercurial character who almost seemed mythical, hearing some of the things that he did during his heyday is a good reminder of how supremely talented he was; even if he did it in an unconventional manner.