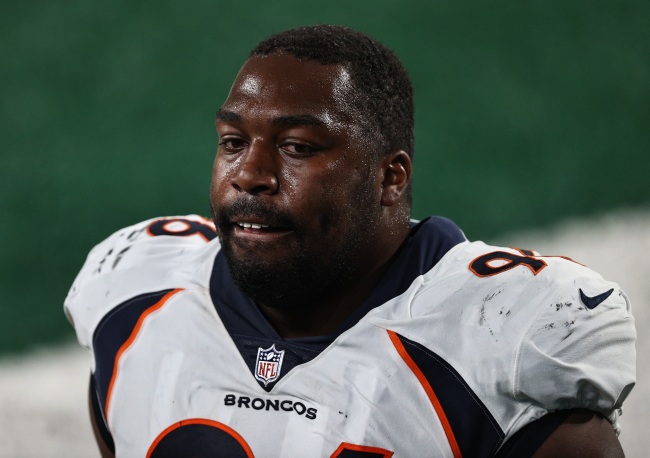 The Denver Broncos-New England Patriots game was forced to be rescheduled following a few positive COVID-19 tests for players on the Pats, moving the contest to Monday instead of Sunday. Such is life in a pandemic, where the NFL schedule has been altered over the past few weeks because of the virus raging on and infecting team facilities.

Given the league’s protocol, the decision to move the Denver-New England game made sense, as the NFL is trying everything it can to keep this regular season as normal as possible. Of course, the first four weeks of the schedule have been anything but normal — and the league did a poor job planning logistics for issues like this after having all offseason to do so — so here we are.

While it’s been a weird AF season to this point, and will (probably) only get weirder, not everyone’s happy with the decision to make shotgun decisions about some of these games — especially if it impacts preparation from week-to-week. One of those people is Shelby Harris, a veteran defender for the Denver Broncos, who took to Twitter to complain about being “punished” by the league for having to play the Pats on Monday and then quickly turning around to play the Miami Dolphins the following Sunday.

Why are we getting punished when we did nothing wrong. Pats go on a bye next week and we are stuck on a short week playing the dolphins help it make sense

As Harris points out, the Broncos game against New England didn’t just get moved to Monday from Sunday, but the Patriots actually have a bye on Week 6, allowing them to stick with a somewhat typical routine. Unfortunately, Denver doesn’t get that luxury, and the team will be on a short week as they prep for Miami.

Although Shelby Harris has a rational point with his complaints about the NFL schedule changing so swiftly, that doesn’t mean many NFL fans saw it that way. In fact, plenty took to Twitter to reply to the defensive end, calling him out for knowing what he was getting into by playing this season, among other things. Take a look below at some of the replies — which included at least one person pointing out the amount of money Harris makes.

Just disregarding any news ever?! Everyone questions that exact thing! People are up in arms constantly when CEOs make a big layoff just to take giant bonus! Cut it with the pitty party BS! Your $3.25M contract would take a person makin $100k 32 years!

Your team is playing terrible. You should be happy you get to play on national television against the Patriots.

plus if you played sunday the you had a week of practice and the patriots had none so is that fair? or is that what you want because your team is that bad? which is it

Patriots were just forced to fly to KC on the same day as playing after just losing their starting QB 2 days earlier. Then this week lost their best defensive player and haven't been able to practice. But sure the Broncos are the ones being treated unfairly……..

you decided to play this season you knew the risks of playing,now you complaining what the NFL is doing to keep its season alive? The titans n bills playing Tuesday the NFL favoring any teams there? if you want to switch jobs with me im down… you can paint an I’ll play football

Pats getting favorable treatment by…being forced to fly to KC the day of the game and potentially risk players still in the incubation period of COVID and spreading to team. Think before you tweet. Every team is going to have some unfair things happen.

You won't need a whole week for the dolphins

You know the old saying that life’s not fair? Well, unfortunately for Shelby Harris and his Denver Broncos’ teammates, that’s just about the best thing to remember in this situation. Whether people want to put blame on the league for being ignorant enough to think a regular season could be played as it normally does, or on players for being cavalier and ignoring rules — like the Tennessee Titans did after multiple positive tests — everyone knows the NFL schedule is a fluid situation right now, and teams and fans should just be ready for the inevitable changes along the way.