Derek Fisher On If LeBron James Is The GOAT ‘You Can’t Discount Kareem, Wilt Chamberlain And Bill Russell’ 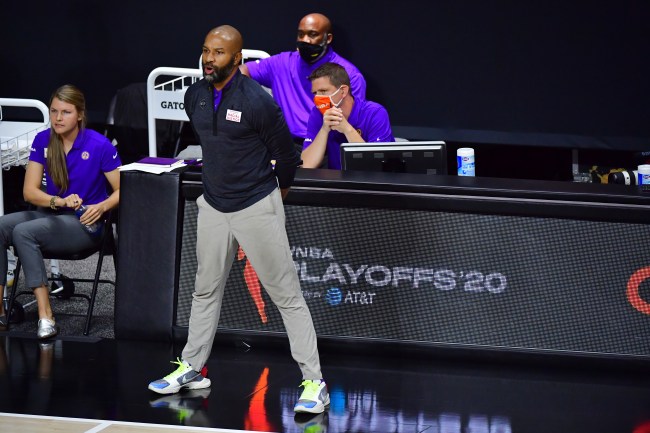 Five-time NBA champion and current LA Sparks head coach Derek Fisher sat down with us to share his thoughts on the Lakers championship, LeBron James greatness, and if he thinks LeBron is the GOAT. Fisher also talked to us about his work with USAA to promote their #HONORTHROUGHACTION Challenge that encourages all Americans to show their support for the nearly 18 million living U.S. military veterans.

Veterans Day honors all of those who have served our country in war or peace — I would love to personally thank all our US veterans for their sacrifice. We are so indebted to your service. This Veterans Day I’m honoring John Fisher, Sergeant United States Air Force, Vietnam War Veteran (1968-1972) 6200 Security Police Squadron, Clark Air Force Base Philippines (1968-1970) 314th Security Police Squadron Little Rock Air Force Base(1970-1972) Security Police Investigator(1970-1972). Join me in drawing a V on your hand with the veteran you want to honor in @USAA #HonorThroughAction V Challenge #USAAPartner #VeteransDay #SalutetoService

Having played for the organization for 13 seasons in his career, Fisher told us he was happy for the current Lakers team after they went through an immense amount of adversity to win a championship for the city of Los Angeles in a year that saw the passing of Kobe Bryant and the onset of a global pandemic.

“They deserve a great deal of credit and admiration for being able to win the championship this year under the circumstances. It’s been a really difficult year for the entire basketball world, for many people around the world losing Kobe back in January and then obviously following with COVID-19 and the pandemic. Just being able to go out there with a lot of uncertainty around sports, around life, and for the Lakers to take the title. I think it says a lot about the team, their courage, their mental toughness, physical toughness and, I’m just really happy for them and happy for the city of LA.”

As someone who played into his mid-thirties, Fisher was most impressed by how LeBron James has been able to continue producing at an elite level despite his age.

“A lot of times when we see people like LeBron doing what he’s doing the easy thing to do is to just say, well look at how big and strong he is. It’s almost like he was born to do it in that way, and I think that’s shortsighted. It takes an incredible amount of discipline and work ethic, and focus, to be able to remain an elite athlete as you get older. The fact that LeBron is still playing and competing like that into his mid-thirties is not genetic. I’m sure genetic has something to do with it, but you cannot sustain that level of excellence without just crazy amounts of hard work and time and effort training and sacrifice.

While D-Fish thinks LeBron should be in the GOAT conversation after putting up another stellar season, he also thinks it’s unfair to discount the legacy of other greats like Kareem Abdul-Jabbar, Wilt Chamberlain, and Bill Russell.

“You have to show respect for everyone that’s come though, you can’t discount Kareem, you can’t discount Bill Russell you know the guys that created lanes for Kobe and LeBron. You know the Oscar Robertsons, The Wilt Chamberlains, and the list could go on, but he’s in the conversation for sure. Not just because of what he’s been able to accomplish in terms of winning championships, but just the consistency and individual performances puts him up there as one of the greatest of all time.”

Fisher, whose father served in the military as a US Air Force veteran, is working with the USAA to get people to step up and show support for military veterans on Veterans Day with the #HonorThroughAction challenge.

I’m working with the USAA, to encourage everybody to just step up and show support for the nearly 18 million living military veterans by having the third annual #HonorThroughAction challenge.

To participate in the challenge, you draw the letter ‘V’ for veterans, in the palm of your hand initials of the veteran in your life, I’m honoring my dad this Veteran’s day.

So you draw the letter ‘V’ with the initials of the veteran in your life to celebrate it on the palm of your hand, snap the photo, and then you share it through social media. Real simple, using the hashtag #HonorThroughAction with a challenge to other people, to show their support and appreciation on this Veterans Day. It’s a great opportunity to show how much they mean to us and the service they provided for us to live the lives we[re able to live.

With a "V" on your hand, you can honor your favorite Veteran. Write it. Snap it. Post it. Join USAA as we honor all those who have served and those currently serving. #HonorThroughAction #VeteransDay pic.twitter.com/mxnnbALy4Y