Devin Hester On Jay Cutler As A QB: Best Accuracy And Knowledge, But ‘The Worst’ At Leadership 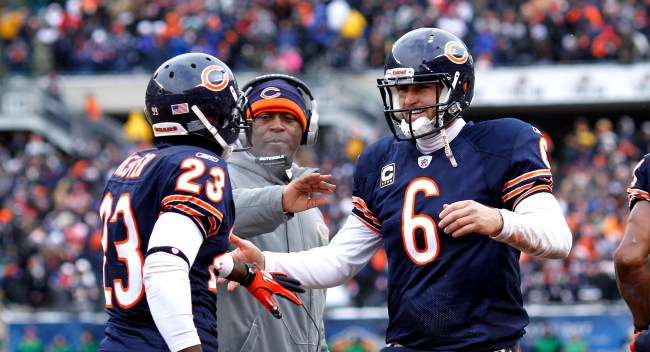 Before he was a reality TV show and social media juggernaut, Jay Cutler played a little quarterback in the National Football League for 12 seasons with the Denver Broncos, Chicago Bears, and Miami Dolphins.

Cutty had a good career too. Not Hall of Fame worthy, but he did throw for over 35,000 yards and 227 touchdowns. Nothing to sneeze at, for sure.

He spent most of his career in Chicago, piling up a very Cutler-esque 51-51 record as the team’s starting QB.

Cutler was like the quarterback equivalent of Jason Garrett as a head coach (who was also, by the way, a quarterback).

From 2009 to 2013, one of Cutler’s offensive weapons was wide receiver slash kick returner extraordinaire Devin Hester (who really deserves to be in the Pro Football Hall of Fame).

In a new interview with Bleacher Report’s Untold Stories on Facebook, Hester spilled some tea about what it was like playing for the Bears with Cutler as the offense’s leader.

The story went almost exactly how you would think it would go.

“He’s not really a sociable guy,” said Hester. “He’s not a talker, you know what I mean? He picks one or two guys, and just leeches on them, and separates himself from everybody.

Well, his estranged wife Kristin Cavallarri did reportedly say Cutty was “lazy” and “unmotivated” – a feeling Bears fans can relate to when it comes to Jay.

One of Cutler’s other main offensive weapons and friends, both on the Broncos and the Bears, Brandon Marshall, admitted to First Take last year, “I had to be a company guy with Jay Cutler. Now I can talk real. Jay Cutler was bad. You happy?”

Marshall continued, “Leadership. He can make every throw. He’s one of the smartest guys I’ve ever been around, but it comes down to this heart right here and leadership. Galvanizing the team.”

He also added when comparing Jay to another quarterback in Miami, “he couldn’t throw like a Jay Cutler, but I’d run through a damn wall for Ryan Fitzpatrick because he’s going to give me his all.”

I Still want Smokin’ Jay doing the NFL broadcasts on my TV though.