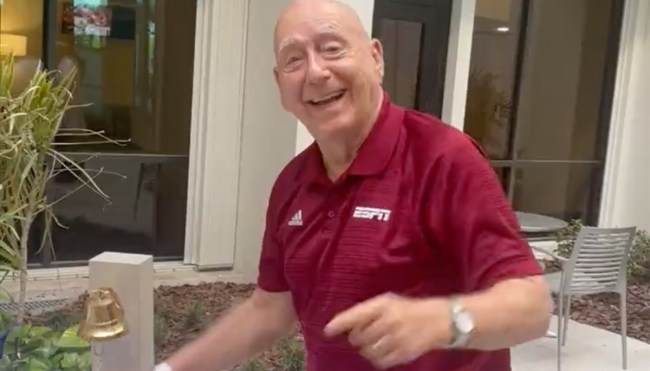 The most recent college basketball season featured a fairly notable void when it comes to the realm of broadcasting, as the legendary Dick Vitale was forced to sit out for the majority of the campaign due to a battle with cancer.

Last summer, the beloved ESPN personality shared he’d undergone treatment for melanoma before revealing doctors had also diagnosed him with lymphoma in the fall. While the 82-year-old was able to don the headset for a showdown between Gonzaga and UCLA in November, he officially stepped away in January to rest his vocal cords ahead of surgery to treat the dysplasia that had also been detected while continuing to undergo chemotherapy.

Last month, Dickie V provided the world with some fantastic news around the same time March Madness kicked off when he revealed a PET scan showed he was cancer-free. Now, he’s returned with the best news of all, as he posted a video of himself ringing the celebratory bell after his medical team informed him he was officially cancer-free (along with a quote from the late, great Jim Valvano that he used for inspiration during the fight).

It was RING THE BELL TIME ! Yes it was a tough 7 months but it was super hearing Dr Brown @SMHCS say that I have zero cancer currently .I was inspired daily by the famous words of my late buddy Jimmy V “Don’t Give up DON’T EVER GIVE UP!” @amyuf @jksports @ESPNPR pic.twitter.com/uRQEzjOug2

The college basketball world was obviously amped to learn about the development, and a number of players, coaches, schools, and fellow members of the media flooded his mentions to congratulate Vitale on the well-earned victory.

An angel truly gets his wings. Fly free of cancer, Dickie V! https://t.co/5lXB4g6aYh

Let the countdown to next season begin. It’s just not the same without him.