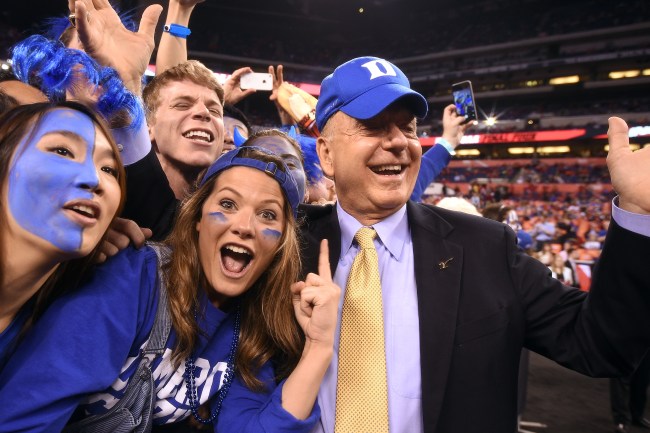 It was then when he declared the solution to the dilemma of compensating college athletes is to eliminate the middleman and allow supremely talented players to profit from agents, appearances, and endorsements.

Vitale, who’s been around college basketball since milk carton rims, may be the greatest authority on evaluating talent at the college level.

As the decade has officially expired, the 80-year-old revealed his top five college basketball players of the decade.

On Tuesday’s #MM365 podcast, @DickieV shared his top 5 players of the decade!

Gotta hand it to Dicky, as far as lists go, this one is rock solid. A reasonable person could make a case for AD being #1, seeing as he won Player of the Year, Defensive Player of the Year, Final Four MOP, a championship, and a gold medal in the same year. Zion’s Duke team, which had three of the top 5 picks in the subsequent NBA draft, ended up shitting the bed in the Elite 8.

Suffice it to say, Kentucky fans were upset about Dick, a Duke fanboy, snubbing Anthony Davis.

Dicky has simply had enough.

Ur classless gutless analysis makes me upset I even reply to someone that doesn’t have a clue .

Imagine wishing death on an old man because you don’t agree with his very reasonable subjective list. And here I am thinking I’m the pathetic one.

Switching gears, one could also make the case that Victor Oladipo should bump Trey Burke out of the Top 5. Maybe throw a Carsen Edwards or a Doug McDermott in there if we’re really looking to jazz things up.

I also wouldn’t be unhappy if Kemba jumped Buddy. May we never forget how good Cardiac Kemba was in crunch time.

UConn's Kemba Walker hits a step back crossover for the game winning shot against Pittsburgh in the Big East Tournament, 2011. pic.twitter.com/qNOBpDJSSV