In the latest episode of I Could Do That from Whistle, NFL veteran WR and former Super Bowl champion Golden Tate challenges YouTube sensation Dockery to a series of football skills challenges. It’s interesting to see how a YouTuber’s athleticism compares to an NFL veteran, even if that vet is considered “old” at just 33 years of age.

Everyone should be operating under the assumption that anything we see online is heavily edited to tell the story the influencer wants us to hear. Unless they’re ‘going live’ then the videos we see from influencers are edited.

Viral YouTube sensation Dockery looks like an incredibly gifted football player in his clips, but is he as legit as he seems in real life? All you need to do to find out is hit that ‘play’ button on the video above (or below) to see Golden Tate challenge him to a series of unique football challenges. But let’s first discuss who Dockery is for anyone out there that might not know him.

Rahmel Dockery is a former Curtis High School wide receiver who was considered to be one of the most explosive football players in Washington state at one time. Dockery went on to play college football for Oregon State University which is where he discovered his gift for making viral YouTube videos.

If you haven’t seen Dockery’s videos before, he gives his viewers a glimpse into the lives of top-tier football players. And this episode of I Could Do That from Whistle will be a great introduction to his style of YouTube video. Here, Dockery faces off against Golden Tate in a series of football challenges that test their hands.

All things considered, I expected Golden Tate to completely leave Dockery in the dust on most of these challenges but he kind of held his own. He even jumped into the YouTube comments with a ‘best hands on the Internet’ reply which seems plausible at this point.

So how athletic is Dockery compared to an NFL wide receiver? Well, it’s difficult to say. Clearly, he’s got great hands and he can run his routes but this was without pads and there wasn’t a defender in sight. I’d LOVE LOVE LOVE to see a YouTube football star take a tackle from a top tackler in the NFL like Avery Williamson or Devin White.

If you enjoyed this episode of I Could Do That from Whistle you should smash the ‘subscribe’ button on their YouTube channel. You can also check out some recent videos shared here on BroBible which include ‘Jets Offensive Lineman Mekhi Becton’s Insane Offseason Workout Is Enough To Crush Mortal Men‘ and ‘Former UCF Kicker Turned YouTube Star Deestroying Surprises A H.S. Football Star On His Day Off‘. 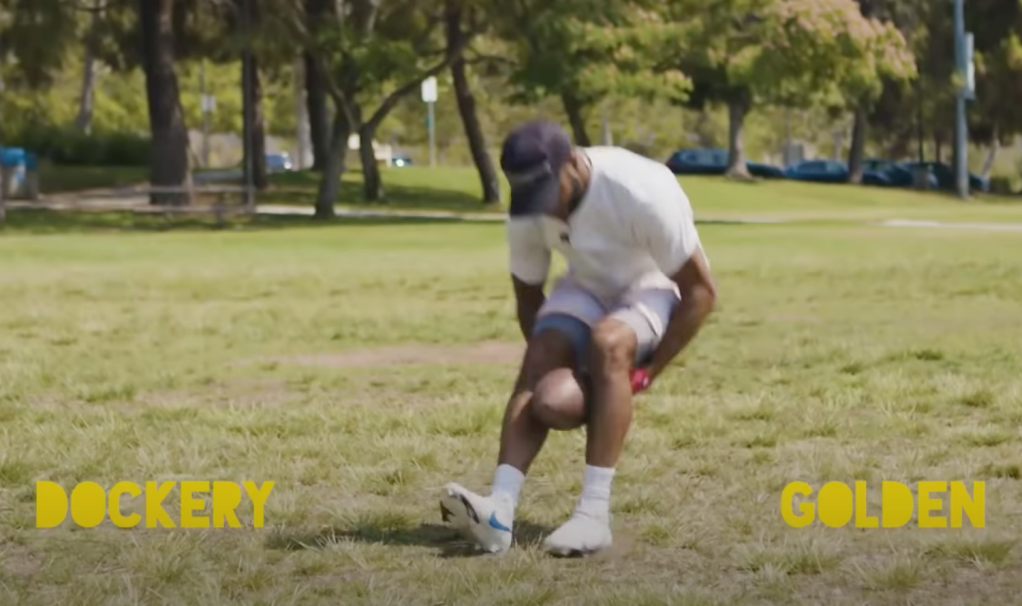