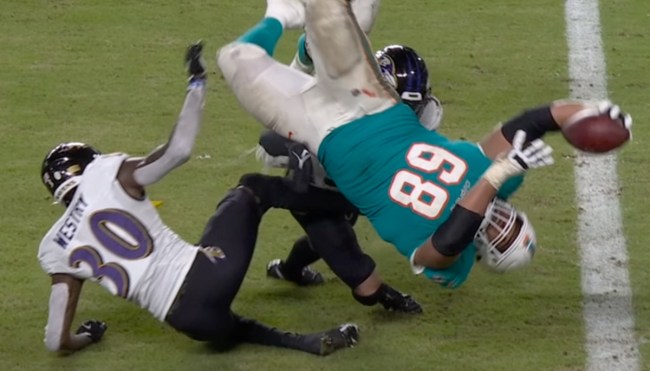 There aren’t many things that can unfold over the course of a football game capable of getting my blood pumping like the hallowed Big Man Touchdown, as there’s nothing quite like the unbridled joy that comes with watching a lineman score six points for his team.

The Big Man Touchdown is a fairly rare occurrence that fans are normally only treated to as the result of a trick play, a particularly bold rushing call, or a fumble that leads to a guy with a body that has no business traveling at high speeds barreling toward the endzone like a chunky middle schooler chasing an ice cream truck.

During Thursday night’s matchup between the Dolphins and the Ravens, it seemed like we were treated to an absolutely legendary Big Man Touchdown courtesy of 6’6″, 327 lb offensive tackle Robert Hunt, who appeared to give Miami a two-possession lead a couple of minutes into the fourth quarter after snagging a pass from Tua Tagovailoa and stretching out to break the plane after getting upended at the goal line.

Sadly, Hunt hadn’t declared himself as an eligible receiver on the play, which meant the Dolphins were hit with an illegal touching penalty and the touchdown was erased (they’d eventually settle for a field goal on the drive and ultimately walk away with a shocking 22-10 victory over Baltimore).

Hunt may not have been credited with a touchdown, but it didn’t take long for the Dolphins to immortalize his valiant effort, as visitors to the team’s facility on Friday morning were greeted by an elevator featuring a photo of the tackle suspended in the air during the play.

The content you never knew that you needed.@RobertHandyHunt goes 🆙 pic.twitter.com/VTMS1zoj6x

I’d also be remiss if I didn’t include this equally amazing tribute from the one and only Mike Camerlengo.

a quick breakdown of the greatest screen pass TD that didn't count pic.twitter.com/1WNIVL1fY8

Heroes may be remembered, but legends like Hunt never die.