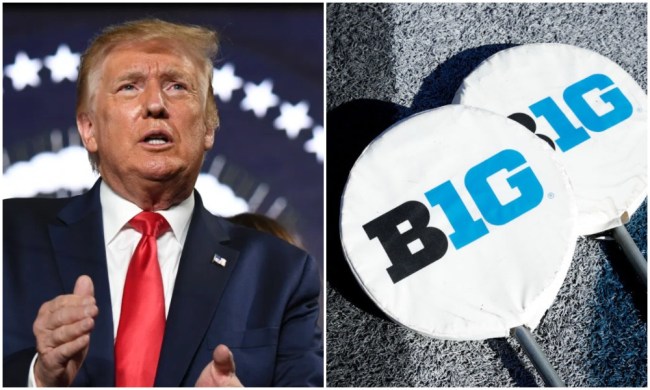 After the Big Ten announced that it wouldn’t be playing football this fall it seemed the majority of people were upset with the decision, and more specifically, how the conference came to the decision.

We’ve seen coaches make their case for the conference to play football this fall, players within the conference actually file lawsuits, and the parents of student-athletes protest the Big Ten and commissioner Kevin Warren’s decision to pull the plug on the season.

Now, the President of the United States has stepped in.

President Donald Trump shared a tweet on Tuesday explaining that he recently had a “very productive” conversation with commissioner Warren about immediately starting up Big Ten football. He ended the tweet by writing “on the one yard line,” so maybe we’re actually close to having the Big Ten reverse course and play football this fall.

Had a very productive conversation with Kevin Warren, Commissioner of the Big Ten Conference, about immediately starting up Big Ten football. Would be good (great!) for everyone – Players, Fans, Country. On the one yard line!

The PAC-12 also elected to cancel football this fall while the other three Power Five conferences, the SEC, Big 12, and ACC are all moving forward with their seasons beginning later this month.

According to Outkick, the call was scheduled at the request of the White House, and both Trump and Warren agreed on sports in the Big Ten returning as soon as possible:

The call, which was described as lasting 15 to 20 minutes, was described as a great and productive conversation which was in no way partisan. In fact, both men, President Trump and Commissioner Warren, stated on the call they agreed that football shouldn’t be partisan in any way and that it was important to get sports back in the Big Ten as soon as it was safely possible.

The latest report involving the Big Ten changing course and playing football this fall suggests the conference is eyeing a possible start during Thanksgiving week.