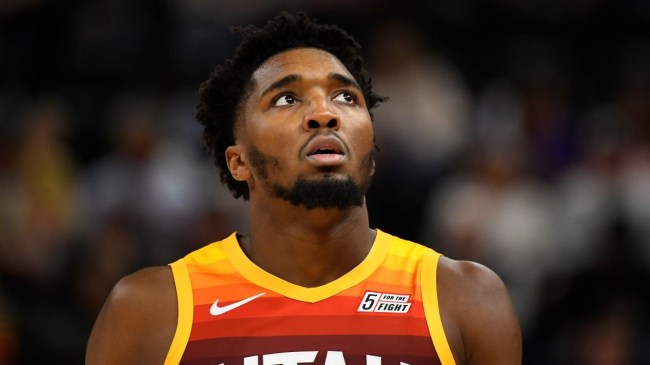 Three-time NBA All-Star Donovan Mitchell embarks on a new chapter of his NBA career this season. Mitchell spent the first five seasons of his career in Utah after the Jazz selected him with the 13th pick in the 2017 NBA Draft.

Utah opted to blow it all up in the offseason, however, and sent star center Rudy Gobert to the Minnesota Timberwolves, while Mitchell was traded to the Cleveland Cavaliers just two months later.

Mitchell sat down with JJ Redick on the “Old Man & The Three” podcast to discuss the move. But they also discussed something much more interesting. Redick asked Mitchell about being in the arena on the day the NBA shutdown in 2020 prior to the bubble playoffs.

The NBA season shut down on Mar. 20, 2020 after Gobert tested positive for COVID. At that point, nobody knew much about the disease. Mitchell walked Redick through what ended up being a whirlwind day and an historic point in NBA history.

Some pretty crazy details from the night the NBA shutdown in March 2020. @spidadmitchell @CP3 pic.twitter.com/qvHzIbWqVi

“We’re ready to go. Rudy is out because he obviously had COVID. He was sick,” Mitchell began. “And we get out there and we’re going through the handshakes. And I remember sitting there, I’m shooting the ball, like chillin’, like ‘oh, this is probably like water on the floor.’

“But then out of nowhere, like, all these suits just come running on the floor. And I’m like, ‘must be like a shooter in the building.’ Like, I’m thinking something crazy and then – it never dawned on me that it was that until it was.

“And then Chris (Paul), CP was like ‘what’s up with Rudy?’ I was like, ‘no one’s saying nothing.’ We’re just like, all right, game’s canceled. So we get in the back, Quin’s like ‘all right, Rudy has COVID.’ So now we’re like ‘oh, shit.’ Like, ‘okay.’ And this was back when we didn’t know nothing. Like we didn’t know anything. So we were in the locker room for nine hours.”

Mitchell then proceeded to explain that the state of Oklahoma didn’t want the players going anywhere. Because at that point so little was known about the disease. He said that each player had to be tested with the original deep nasal swabs.

Chris Paul then sent the team both food and wine and Mitchell said that he and his teammates proceeded to get drunk. After leaving, Mitchell said anyone not with the team wore a full hazmat suit.

The full story is completely bananas and fantastic deep dive into an absolutely bananas day in the NBA.