REPORT: Doug Pederson On Thin Ice In Philadelphia After Meeting With Team Owner 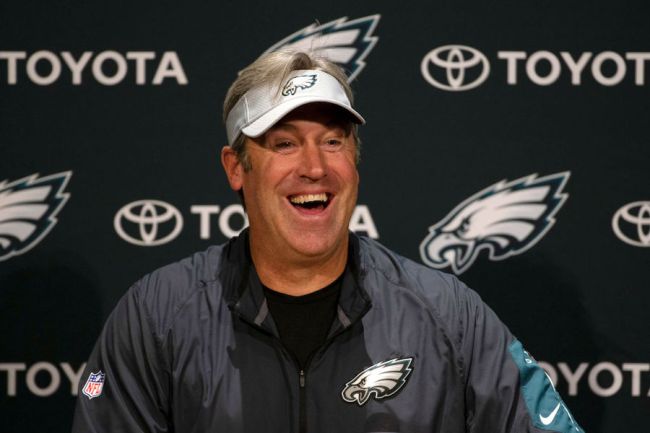 According to ESPN’s Chris Mortenson, Philadelphia Eagles head coach Doug Pederson’s status with the organization is “not firm.”

Mortenson made the comments on “NFL Countdown” earlier today.

Both Mortenson and ESPN colleague Tim McManus were told that Eagles owner Jeffrey Lurie is “concerned about the current state of the franchise.”

“Pederson could be out if owner Jeffrey Lurie is not confident about Pederson’s vision going forward after the two meet again soon. Lurie’s concerns extend well beyond Carson Wentz,” Mortensen said on “NFL Countdown.”

Pederson was believed to be returning in 2021 and made it past the typical week and weekend when coaches get canned, but a recent meeting with Laurie didn’t go so well.

Lurie and Pederson met Tuesday, two days after the Eagles ended the season with a 4-11-1 record. It was the team’s worst record in eight years and third-worst in the owner’s 26-plus years in Philadelphia. But the coach had expressed confidence in his return because of his overall accomplishments, namely winning the Super Bowl three years ago.

The season ended in controversy when Pederson seemingly threw the last game against Washington when he pulled quarterback Jalen Hurts for Nate Sudfeld. He denied it and said that he simply wanted to give Sudfeld playing time.

Still, multiple players and coaches were shocked and outraged by the timing of the quarterback change — the Eagles were down only three points early in the fourth quarter — team sources told The Inquirer last week.

Especially for a team that finished the season in last place with four wins, got openly ripped for tanking a game on national television, rosters two quarterbacks who are pissed off at the head coach, and suddenly have a ton of unhappy players.

[via Press of AC]