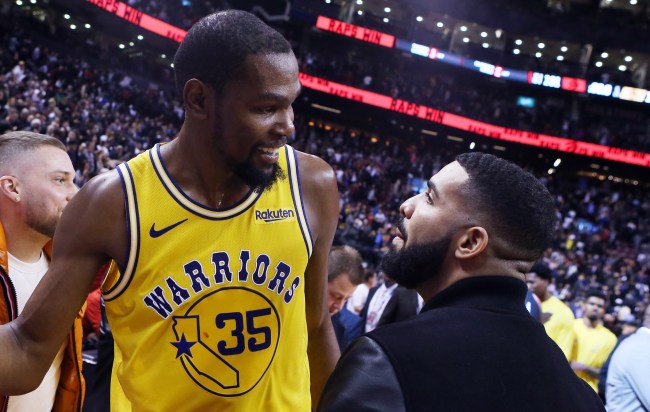 There was a ton of speculation concerning whether or not Kevin Durant would make his return to the court for the fifth game of the NBA Finals on Monday night but he would ultimately decide to suit up in an attempt to help the Warriors fend off elimination against the Raptors.

Unfortunately, things went very awry early in the second quarter when he collapsed to the court after suffering an injury to his Achilles, which you can watch for yourself if you’re in the mood to feel a little queasy.

Play came to a halt as fans in Toronto respectfully quieted down as Durant was tended to—and by that I mean they cheered for the injury and waved him off the court because I guess that’s just how they do things up north.

However, there was at least one person in attendance who understands that players are real, actual human beings—Drake, who was visibly dismayed after seeing Durant go down and approached him as he was escorted off of the court.

Drake consoled Kevin Durant as he walked off in the second quarter. pic.twitter.com/05ZpHdL49l

Drake has taken great pleasure in trolling the hell out of opponents—including Durant—this postseason but even he was able to put his fandom aside and acknowledge that some things matter more than the outcome of a game—even when a championship is on the line.

After the game, the rapper threw some positive vibes Durant’s way with a classy Instagram post that plenty of his fellow fans could learn a lesson from.

Say what you will about the “vocal minority” but many Raptors fans need to do better than they did last night. I can only hope their global ambassador can show them the light.