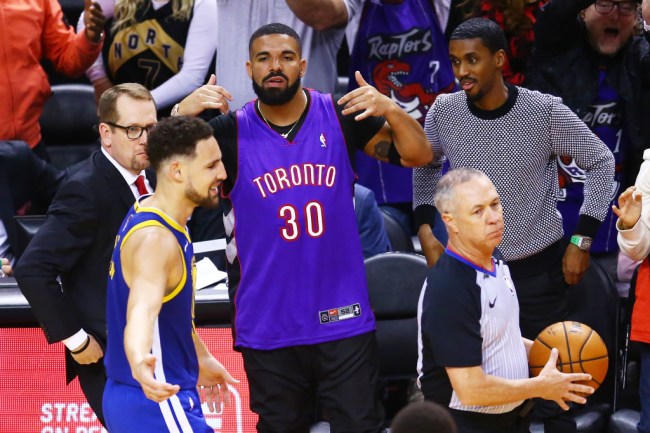 Over the past few weeks, Drake has channeled his inner Frank Reynolds in The Nightman Cometh and fully embraced his role as a troll, although his interpretation has nothing to do with boy’s souls (or holes).

The rapper originally made waves during the Eastern Conference Finals, where he was warned by the NBA for an ongoing series of sideline antics that resulted in him securing some free real estate inside the heads of the Bucks.

Now that the Raptors are in the NBA Finals, Drake has gone all-in as far as his antagonism is concerned, whether we’re talking about his run-in with Draymond Green following the first game of the series or the Home Alone hoodie he rocked in an attempt to get under the skin of Kevin Durant.

Last night, the Warriors took on Toronto in Oakland and did some trolling of their own when they decided to play the brutal diss track Pusha-T released a year ago that affected Drake so hard that he put out a $100,000 bounty in attempt to find dirt for a response that never came.

Warriors playing “the story of adidon” from Pusha T….All out War against Drake 😂 pic.twitter.com/A2aWa9g4kH

However, it was Drake who would get the last laugh, as his hometown team took a 2-1 lead in the series following a 123-109 win.

You knew it was only a matter of time until the rapper took a victory lap and he did exactly that when he jumped on Instagram to post a picture of a shirtless (and, based on the looks of it, pretty faded) Klay Thompson that was taken back in Las Vegas in 2016.

Thompson might not have been active last night but that doesn’t mean he was able to escape Drake’s wrath. I can’t wait to see what else he has in store as the series continues to play out.