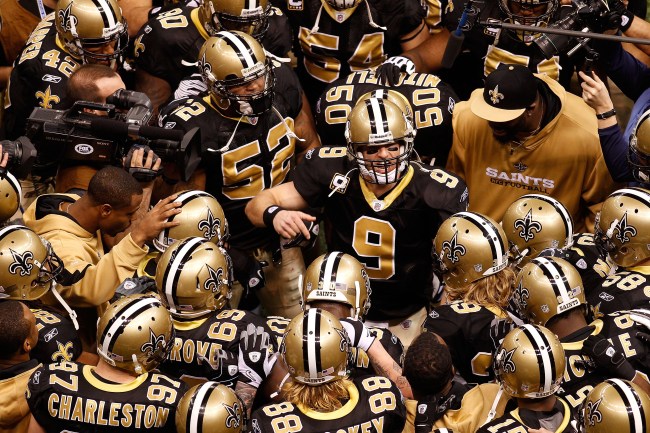 Drew Brees is the NFL’s undisputed Pre-Game Speech king. Some of his hype talks make Al Pacino’s Game of Inches speech sound like Danny O’Shea trying to pump up the Little Giants before getting walloped by his superior-in-every-way older brother. (The fact that Ice Box, Hot Hands Hanon, and the kid who blows snot bubbles were able to take down Spike and the Cowboys should be a lesson to all that anything is possible.)

Anyway, before the Saints beat the Eagles in the NFC Divisional round (thanks Alshon!), the 12-time Pro Bowl quarterback delivered a speech that momentarily made me a Saints fan. He had me ready to risk it all. After watching the clip below, tell me I’m not the only one.

Brees led by example, throwing for 301 yards on 28-38 passing and two touchdowns.

The 18-year NFL vet has been delivering fiery pre-game speeches for 11 seasons now, reprising the role from former Saints receiver Joe Horn in 2008. Brees has gone on the record saying that he was very uncomfortable with the role when the torch was passed.

“It’s not usually something I would do, not really even my personality,” Brees said. “So I had to step out of my comfort zone a little bit because I thought it was something that was needed. I’m for whatever gets our team ready to play, play at a high level, gets us fired up.”

Brees has taken inspiration from movies (300, in particular) and his life events–namely a trip Brees took to Guantanamo Bay, Cuba, on a USO tour with the Marines. There, he borrowed the Marines chant he heard on a morning jog: “One, two, win for you. Three, four, win some more.”

For over a decade, Brees’ speeches have been the most viewed videos on the Saints official social media accounts, and it’s easy to see why. Everyone fucking loves them.

me after hearing this pic.twitter.com/gSzIqFTbGk

Michael Thomas looking at Brees like he boutta risk it all

Sidenote: I walked by Drew Brees in New York on the way to a fundraiser. Literally just me and him on the sidewalk. I fan-boyed and asked him for a picture. He agreed, and it couldn’t have been a more pleasant 30 second exchange.