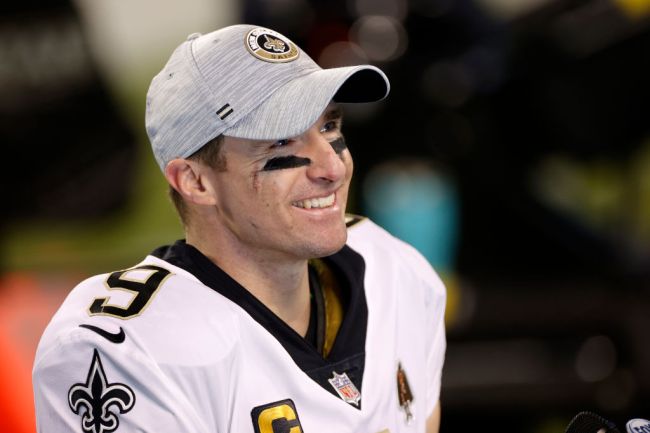 Sports television deals are made years ahead of time between the leagues and their broadcast partners. However, it’s rather uncommon to see a deal get done in advance between an individual and a network like Drew Brees did last year. The 41-year-old was mulling over his playing future last January and received calls from a few networks about getting him in the booth to call games. Come April, the then-Saints starting quarterback had inked a deal with NBC that was set to kick in after he retired from the NFL.

Well, Brees went on to return for one final season before retiring in March after a NFC Divisional Round loss to the eventual Super Bowl champions.

Drew Brees took one last look back at the Superdome before officially retiring after 20 seasons in the NFL 👏pic.twitter.com/Lu4zSIzDaL

Knowing that his time in the league was coming near an end, ESPN, Fox and NBC were all trying to get Brees locked up ahead of their competitors, but he ultimately chose the Peacock for around $6.5 million per year. To put that in comparison, Troy Aikman makes about $7 million with FOX and the number is nearly double Tony Romo’s rookie contract with CBS.

Going from on the field directly to a NFL broadcast booth is a difficult task, with Romo being the exception, and the network has a plan in place to get him comfortable in the role. Reports started to surface last month that NBC has a “secret plan” in place to replace long-time Sunday Night Football host Chris Collinsworth with Brees in the not-so-distant future. It looks like that plan is beginning to take shape.

The network announce on Thursday that Brees will call Notre Dame football games alongside Mike Tirico and sideline reporter Kathryn Tappen this fall. Last season, Tony Dungy was in the booth after he replaced Doug Flutie, and now Brees will replace him.

Other reports have said that he will also work for the network as an analyst for the Sunday Night Football pregame show ‘Football Night In America,’ as well as this summer’s upcoming Olympic Games, though neither of those rumors have been confirmed by NBC. Once Brees is acclimated to being an on-air talent, it seems as though he and Tirico are in line to take over for Al Michaels and Collinsworth on SNF as soon as next season. Not this upcoming season, but next.

NBC holds the rights to this year’s Super Bowl 56 on February 6, 2022, and it would be an incredibly convenient time to send Collinsworth and Michaels out with a proper send-off on the biggest stage. Turning the page toward a new chapter of NBC’s booth makes a lot of sense after the broadcast calendar year comes to a close.

In the meantime, Brees will be on your airwaves for at least seven games this fall:

Additionally, this Saturday’s Blue-Gold Notre Dame spring game will air exclusively on Peacock. It has yet to be seen whether Brees will be immediately thrust into the booth for the game, but his NBC debut could come as soon as tomorrow. More than likely, it will be a “b squad” calling the game. However, with such low expectations for a spring game broadcast, it could be a great chance for Brees to get his chops wet.