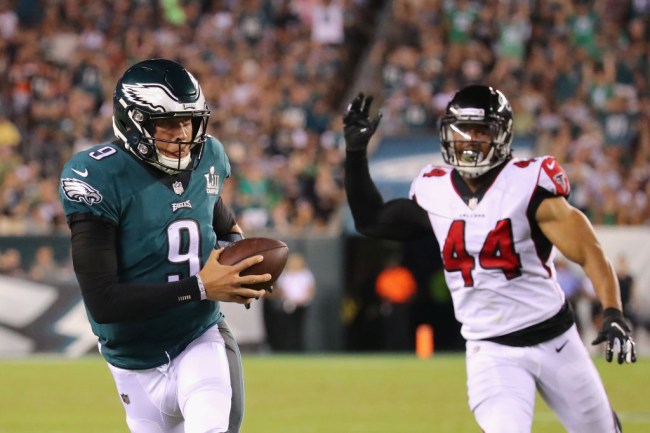 There’s a chance it could be overshadowed by Justin Timberlake’s electric halftime performance but I’m willing to bet the play dubbed “The Philly Special” will go down as the most iconic moment of Super Bowl LII.

The game-changing moment was an especially tough blow to the Patriots because they’d attempted to run a trick play of their own that led to Tom Brady getting dragged for his receiving skills (or lack thereof).

The play made Nick Foles an instant legend in Philadelphia (even though it might have been illegal) and inspired at least one ill-advised tattoo in addition to a statue that was recently revealed outside Lincoln Field.

.@Eagles "Yeah, let's do it." pic.twitter.com/Leb9cgPRkS

The Eagles opened their season with an 18-12 win against the Falcons on Thursday night and were up to their old tricks— or should I say “new tricks”— when they successfully pulled off some more shenanigans while trailing in the third quarter.

They did it again?
YES!

People were obviously quick to draw parallels between the play and the one that probably inspired at least a few Eagles fans to name their kid “Nick” but it turns out the team actually pulled out one of the better trolls I’ve seen since they debuted their Super Bowl rings.

After the game, Doug Pedersen admitted the team had stolen the play Brady and the Patriots attempted to pull off, saying:

“It was a play we had put in for this week. It was a play that was in our third-down menu. We were on the correct hash mark and it was the right time of the game.”

Lane Johnson— the hero who brought free beer to Philadelphia— also confirmed the play was a carbon copy of the one run by New England:

Eagles OT Lane Johnson on Nelson Agholor’s throw to Nick Foles, tells team broadcast it wasn’t Philly Special: “It was the same play the Patriots used — the one that Tom dropped.”

This is the kind of pettiness I can really get behind.