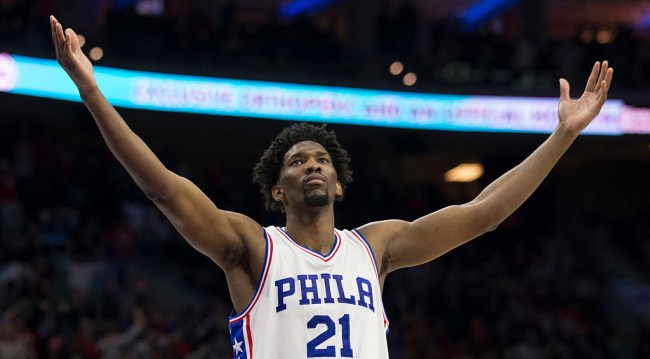 It’s been over a month and a half since we last heard from NBA treasure Joel Embiid. For most people that would not be that long, but part of the reason we love Embiid so much is that he is so active, outspoken and funny off the court.

Of course, we knew it was just a matter of time before he popped into the headlines again, and once again he delivered the goods.

In a new story he wrote for The Players’ Tribune, Embiid explained how he added a three-point shot to his basketball arsenal while he was still in Cameroon by watching YouTube videos… of white guys… shooting three pointers.

So I’m chilling one night, and I go on YouTube, and I’m thinking I’m about to figure this shooting thing out.

HOW TO SHOOT 3 POINTERS.

HOW TO SHOOT GOOD FORM

Then the light bulb went off, man. I typed in the magic words.

Listen, I know it’s a stereotype, but have you ever seen a normal, 30-year-old white guy shoot a three-pointer? That elbow is tucked, man. The knees are bent. The follow-through is perfect. Always. You know how in America, there’s always an older guy wearing like EVERLAST sweat-shorts at the court? That guy is always a problem. His J is always wet.

Those are the guys I learned from on YouTube. Just random people shooting threes with perfect form. Me and Michael [Frazier II, who went on to play in college at Florida] would play after practice for hours, and I’d just try to imitate how they shot the ball, and I started being able to compete. It was crazy, because getting some range changed my whole game. Teams couldn’t play off me anymore, and I started doing a lot better.

Considering Embiid is 7-feet tall and so far has a career 32.7% success rate from behind the arc in the NBA, it seems like watching those video paid off.

He also talked about how his life is like a movie.

This is a real story. Hand to God. When I came over from Cameroon at 16, I didn’t know any English, didn’t know a single person in America, didn’t really understand the culture except for like basic hip-hop. And I know people sort of know my story, but I don’t think they really understand how crazy it is. Because I had just started playing basketball literally — literally — three months before I got an offer to come play high school ball in Florida.

Oh, and he sucked. And his teammates made fun of him. And his coach kicked him out of the gym. That’s when he got “really, really motivated.” And hit up YouTube to watch some videos.

Imagine it. I’m out there shooting bricks, yelling out Kobe, on a busted hoop in Cameroon.

Read the entire entertaining piece over at ThePlayersTribune.com.