Thanks To The NFL’s Schedule, Emmanuel Sanders Could Play In 17 Games This Season, With No Bye Weeks 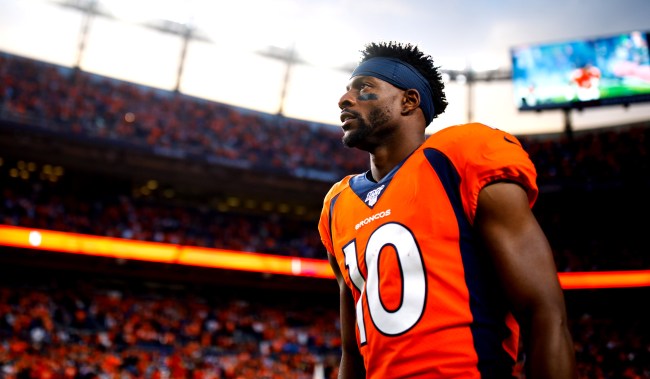 Thanks to the bye weeks built into the NFL schedule, wide receiver Emmanuel Sanders could end up playing in 17 games this season after being traded from the 2-5 Denver Broncos to the 6-0 San Francisco 49ers.

The 49ers already had their bye week, not playing on the September 29th weekend. The Broncos’ bye week doesn’t come until the weekend of November 10th.

In addition to potentially playing in 17 games, more than any other player in the NFL this season, he also could be the only NFL player to not get a bye week off.

On top of that, Sanders already played in one Thursday night game after a Sunday game – last Thursday versus the Chiefs – and gets to play in another short game week with the 49ers when they meet the Cardinals next Thursday night.

According to Pro Football Talk, defensive tackle Damon Harrison also played in 17 games during the 2018 NFL season after being traded from the Giants to the Lions.

PFT also reports that the current collective bargaining agreement, which expires in 2021, does not address this issue.

Perhaps it will be in the next one as owners seek to expand the current schedule from 16 games to 17, after already dropping the idea of an 18-game season.

Because if they don’t, and there is an additional game added to the schedule, it is a very real possibility that a player could end up playing in 18 GAMES with no bye in the future.