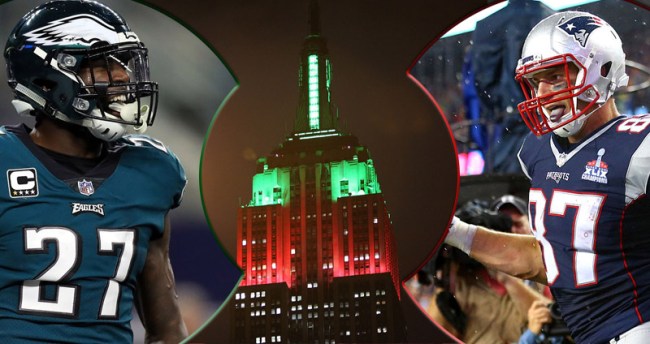 The Empire State Building, as it often does when a celebration is in order, was lit up on Sunday night with the colors of the Philadelphia Eagles and New England Patriots to celebrate the two teams making it to Super Bowl LII. (We’re still doing Roman numerals, huh, NFL? I thought maybe since Super Bowl L was Super Bowl 50 we were done with that silliness. But I digress.)

Like I said, this is nothing new. For instance, tonight, January 22nd, the Empire State Building will be lit up red in honor of the 25th anniversary of WWE Raw. On Thursday, the building will be lit up in white and blue to honor the 30th anniversary of Phantom of the Opera. It also will be specially lit for Valentine’s Day, Presidents’ Day, the Westminster Dog Show, and numerous other occasions for the rest of the year.

That doesn’t mean New Yorkers have to like it, of course. New Yorkers don’t like many things. That’s just how they roll. So when they caught a glimpse of the Empire State Building lit up in the colors of two of their hated NFL rivals, needless to say, they lost their shit.

Congratulations to the @Patriots and the @Eagles, The AFC and NFC Champions! In honor of their upcoming trip to the big game our lights are now shining in their colors. Who will you be cheering for on February 4th? 🏈 pic.twitter.com/IsDZLLbrmG

That right there is definitely an “oh no they didn’t” moment and the responses from New Yorkers, well, they weren’t very positive.

WTF is this? Whoever was behind this nonsense needs to be reassigned ASAP, F the Eagles and I’m sure the Jets fans feel that way about the Pats. Change it now!

Unacceptable!!! You know you’re in New York, right? Home of the division rival @giants and @NYJets? This is not cool, not cool at all. 🤦‍♀️🙄

.@EmpireStateBldg Which one do we select? They all seem relevant. #NYC #EmpireStateBuildingFail pic.twitter.com/6t5XY9dfEC

STOP THIS MADNESS. The person in charge of this social media account should be fired and maybe arrested.

This would never happen in Boston or Philadelphia. You should be ashamed of yourselves. This is the EMPIRE STATE! Those colors only belong to the Jets and Giants.

Well the Empire State Building had a good run as a NYC icon. Now it appears that it is time to replace it.

You just lost your right to be part of our city. Shame on you @EmpireStateBldg!

Until when? Need to know when I can open my blinds again

This is not how you New York.

Fans of the Jets and Giants will be rooting for a meteor to drop from the sky on the stadium. Seeing the Empire State Building celebrating either of the rival franchises is sickening. Who was the idiot behind this idea?

That… seems a little extreme, but then again, if something like this happened in Philly, well…