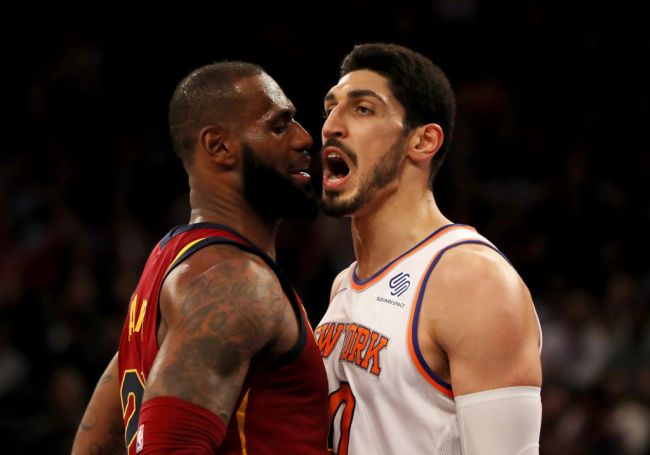 Enes Kanter v. LeBron James petty wars date back to 2017 when Kanter, then a Knick, publicly blasted LeBron for wearing shoes that read “I’m King” during a game at Madison Square Garden.

There was also this in-game brouhaha in November of that same year.

“I don’t care who you are, what you call yourself—king, queen, princess—we’re going to fight,” Kanter told reporters after the game.

Flash forward four years and it appears Kanter is still not afraid to publicly lambaste the face of the league.

During a recent appearance on CNN, Kanter was asked about LeBron’s decision to not urge other NBA players to get vaccinated. James told the media he was initially skeptical about the vaccine, adding: “I think everyone has their own choice to do what they feel is right for themselves and their family.”

“When I heard it, I was very disappointed, and it’s ridiculous,” Kanter said. “Obviously, LeBron James, he’s one of the faces of the league, and he should be the first one to go out there and say, ‘Listen, everyone. I got the vaccine, and I’m encouraging everyone, my community, everyone, basketball fans, non-basketball fans and sports fans are just going out there and get this vaccine, so we can save other lives.’”

“When I heard that, I just couldn’t believe it. But I hope he can educate himself about this vaccination and inspire and encourage other people around him.”

After the clip went viral, there were two emerging schools of thought.

They got Enes Kanter and a white woman on CNN discussing how lebron should speak up about the vaccine to help the black community. Lol wtf

Lol they really called Enes Kanter to speak on issues in the black community https://t.co/hdY1f6xVgj

Kanter is right and it’s embarrassing he has to scold the face of the league https://t.co/KmiSzMSkcg

Enes Kanter is correct! Nobody is beyond reproach or criticism & that includes your favorite athletes. Those with the biggest platforms have the most responsibility.

Same reaction . The irony is Kanter is actually the outspoken athlete for the people Yal swear Lebron is https://t.co/y66LQgn2VU

At the time of this writing, the United States is the 36th most vaccinated country in the world. 36.