For The Second Summer In A Row, Eric Clapton Has Caught A Dinosaur-Sized Salmon While Fishing In Iceland 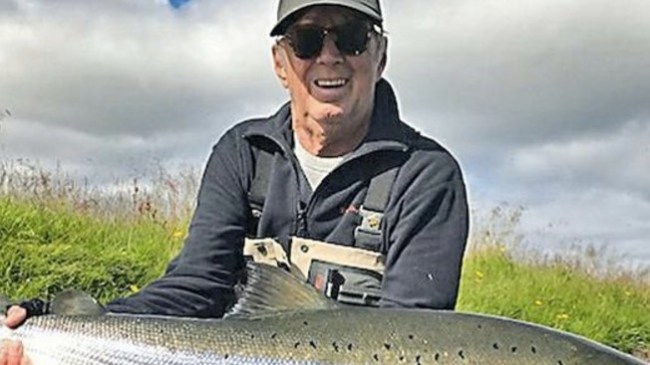 Iceland is home to some of the best salmon fishing in the world. Eric Clapton, the singer/guitarist behind hits like ‘Layla’ and ‘Cocaine’ is one of the greatest guitarists to ever live, and he’s also an avid salmon fisherman. Iceland’s just a quick flight north from the United Kingdom where Eric Clapton calls home, and he’s been fishing the chilly waters of Iceland for years now.

Last Summer, this article/story/picture went viral after Eric Clapton landed the single largest salmon caught in Iceland in all of 2016. Fishermen all across the planet were blown away by the size of that 42.5-inch (108cm) salmon which took Eric Clapton an estimated 2.5 hours to reel in. And rightfully so, that fish looked prehistoric.

Eric Clapton made the short flight from London to Reykjavik again this Summer and has once again landed a trophy fish, as reported by the Iceland Monitor. This year’s trophy salmon measured an astounding 105 centimeters (just over 41 inches), and it took Clapton over 40 minutes to reel in this giant fish: 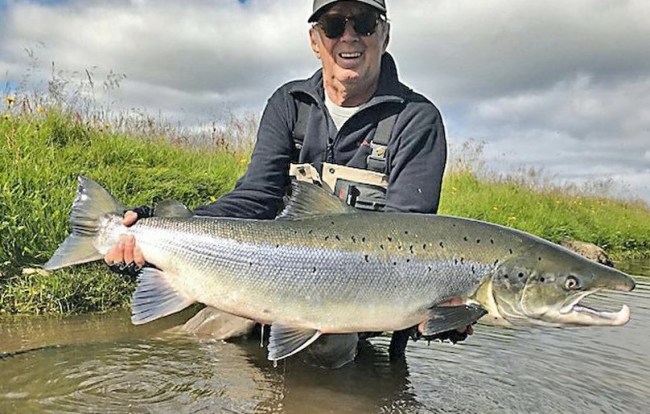 Clapton caught this massive salmon while fly fishing the Hnausastrengur River. He was using a #12 ‘Evening Dress’, a fly made from green, gold, and black peacock feathers. The Hnausastrengur River has reportedly produced some of the largest salmon in all of Iceland over the past few years.

I went to Iceland back in December for New Year’s Eve and I now realize that everything in Iceland looks prehistoric. The entire country looks like a cross between the setting of a Sci-Fi film and a National Geographic photo shoot. The mountains are larger than life, as are the volcanoes and waterfalls. So it makes perfect sense that the salmon there are also gargantuan.

Unfortunately for me, I was in Iceland over the Winter and wasn’t able to do any salmon fishing because the rivers were all frozen over or closed to fishing. Fortunately for me, I was still able to sample Icelandic salmon during almost every meal I had in Reykjavik, which is home to some of the best seafood in the entire world. I simply cannot recommend Iceland enough, bros, if you love eating. It’s expensive but well worth it.

Before you head out, if you haven’t seen the dinosaur that Eric Clapton caught last year you can check that fish out right here.