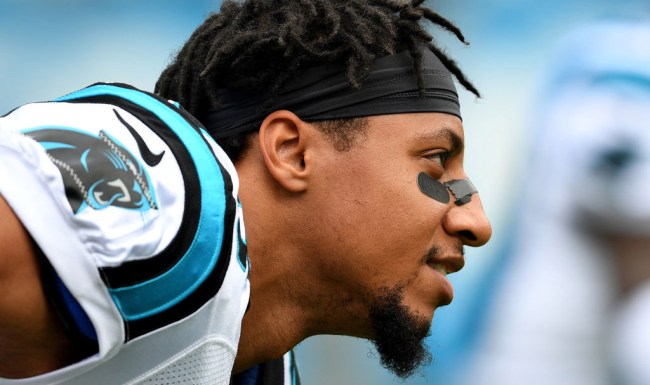 26-year-old former first round pick and Pro Bowl safety Eric Reid made his 2018 NFL debut on Sunday in the Carolina Panthers’ wild last-second win over the New York Giants.

Prior to Reid’s first NFL game this season, he once again took a knee during the playing of the national anthem, just as he told his head coach Ron Rivera he would.

When Reid was asked to comment on the victory, his emotions were mixed, telling The Undefeated, “It’s bittersweet. I won the game, but Colin is at home with my kids. He should be playing.”

Reid also explained to the media in the locker room after the game why he continued his protest.

Eric Reid on why he continued his protest: pic.twitter.com/kgSVlAyOCX

Reid and Kaepernick are both currently pursuing collusion grievances against the NFL, alleging the owners conspired to keep them unemployed based on their outspoken activism.

Kaepernick, who played with Reid in San Francisco, and is a close friend, shared his support on social media, writing, “My Brother @e_reid35, with @kstills and @ithinkisee12, continue to take a knee against systemic oppression. They are unwavering in their conviction! #ImWithReid.”

Several Carolina Panthers fans also took to social media to express their displeasure with Reid and the team.

@E_Reid35 if its so bittersweet you should go sit with @Kaepernick7 in a different country and pout together, your kicker just ripped a 63 yard go ahead field goal, if you are not hype about that, you need to reconsider PLAYING football instead of using it as a protest #getbetter

Did Reid really just totally downplay a great TEAM win due to Karpernick being a shitty QB that isn’t worth the media circus he’d bring?

Well I hope they cut him. Let him sit at home again and see how sweet that is

Of course, there were also many that supported Reid and the Panthers on Sunday.

Now that’s the kind of Panther I can support. @ryankalil hoping you’re invested in fighting police brutality against black people, blatant racism and ignorance of constitutional rights in the NFL, and the shortfalls of the justice system. Use your platform for justice…

Continue to #takeaknee shoutout to Eric Reid and Colin Kapernick

Pretty much everyone on this thread pic.twitter.com/u9rU5keTWe