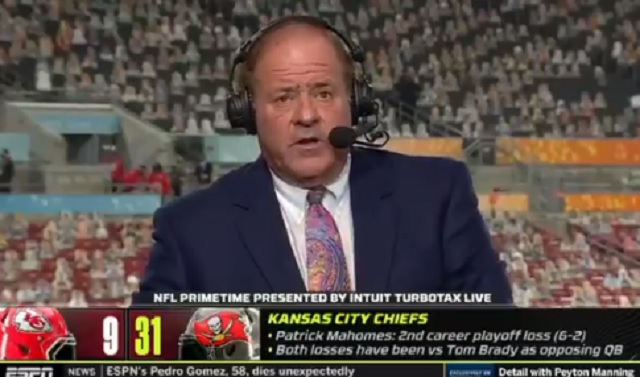 ESPN’s Chris Berman found himself in hot water on Sunday night after he made some bizarre comments about Britt Reid’s car accident.

During the segment on NFL Live, Berman speculated that the Chiefs may have lost because Andy Reid was too distracted to coach because he was thinking about the car crash involving his son that left a five-year-old girl fighting for her life.

He was speculating that maybe the accident involving Andy Reid's son that sent a 5yr old to the hospital (brain injury) may have contributed to KC's super bowl performance because Andy Reid "Their leader" was hurting pic.twitter.com/84Br3Lq27H

Coach Reid is only human, and this is Thursday night out of nowhere and no way would the team use it as an excuse but they looked way out sync…No way that the Chiefs would say this distracted them…but this is their leader, coach Reid is their leader, to see their leader hurting like this, they were hurting and I think it reflected

Chris Berman implying the Chiefs lost because Andy Reid had a rough week minimizes the fact HIS SON ALMOST KILLED A FAMILY. Jesus fucking Christ @espn That was by far the worst thing I’ve ever heard out of one of your personalities.

Chris Berman needs to retire. He no longer sees his job as commenting on the event but he now sees himself as being part of it. He literally brought the whole show yo a dead stop. #SuperBowl

Chris Berman said..it might have been a distraction for the chiefs to not have Andy Reids son there…Guess what..a child might die..that might be distracting to that families life. He needs to resign.

Listening to Berman choke through trying to explain whether an impaired Britt Reid nearly killing a 5 yr old affected the Chiefs tonight was really something.

To speculate at all is stupid and irresponsible.. poor choice to even bring up and poor attempt at discrediting the Bucs.. @espn Chris Berman. So now it was the car accident and not the Bucs that made the Chiefs not themselves.. 🙄 smh..