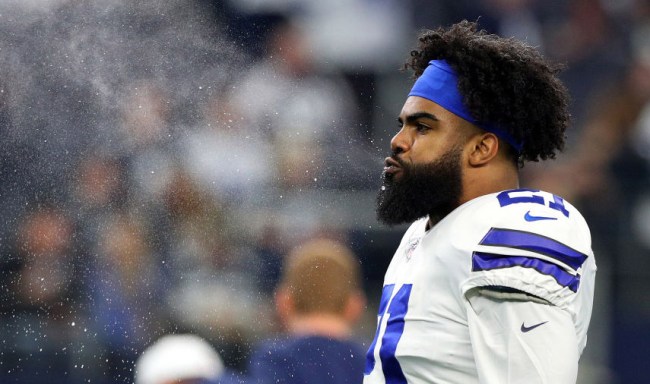 Dallas Cowboys running back Ezekiel Elliott knows what it’s like to be accused of domestic violence, even going so far as to sue the NFL when he was suspended for allegedly abusing his ex-girlfriend.

He ended up serving a six-game suspension at the beginning of the 2017 NFL season, despite repeated claims of innnocence.

So the recent suspension of Chiefs running back Kareem Hunt and the arrest of now Redskins linebacker Reuben Foster, both over domestic violence assaults, was bound to be a topic Elliott was going to have to address.

On Wednesday, when asked by the media what advice he would give to Hunt and Foster, Elliott responded, “Just focus on your day to day life, making sure you’re winning the next day. When you start looking down the road you can kind of get bogged down. Just make sure you focus on the day to day and doing better day to day and things are going to work themselves out.”

Elliott’s take was a lot more optimistic than former Chiefs running back Larry Johnson’s, whose career was also tarnished by domestic violence.

“When I saw this video, it made me so upset because these young players do not reach out to guys who have been through these situations,” Johnson said on The Zach Gelb Show. “He is wearing literally my number, my jersey. We are linked in a way that he doesn’t want to be linked. That’s why I was cheering him on during the season. I was really proud of him for everything he’s done. He was really owning that number. But when this situation happened, it made me so upset because I was watching myself. I saw when he was talking to the police, I had that face – that face of, ‘I know I messed up, but I don’t know how to get out of it.’”

Johnson says he puts Hunt’s chances of reviving his NFL career at 50-50. Hunt is only 23-years-old.

During the same media session, Ezekiel Elliott also addressed being fined once again by the NFL for his entertaining and harmless Salvation Army-related celebration on Thanksgiving where he dropped $21 and later dropped QB Dak Prescott into the giant kettle.

“We’re trying to bring awareness to the Salvation Army. If the NFL doesn’t like that, then, that’s on them. I’ll pay their little fine,” said Elliott.

Elliott was asked if he found it ridiculous that the league would fine him for dropping money and his quarterback into the kettle.

For the record, Elliott and Prescott donated $21,000 to the Salvation Army’s Red Kettle campaign. And he is appealing the $13,369 NFL fine.