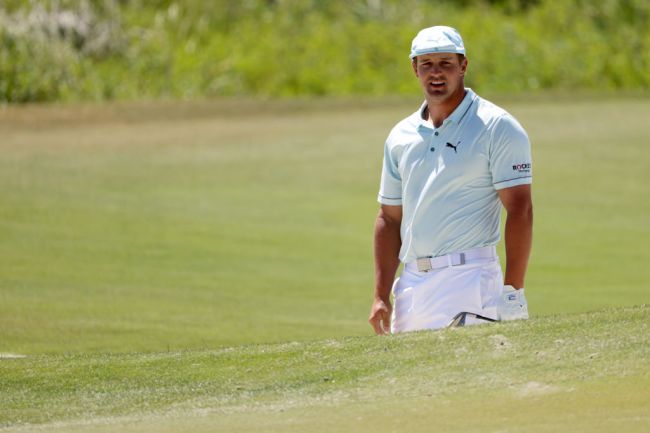 Phil Mickelson becomes the oldest major champion in the history of the game, and 24 hours later the rivalry between Brooks Koepka and Bryson DeChambeau hits an all-new level. I’m not sure what we all did to deserve this, but the golf world is on fire right now with some ‘Real Housewives’ like drama.

The latest drama between the two began when an unaired Koepka interview with Golf Channel went viral on Monday night. The four-time major winner explains how tough it was to putt in the conditions during the second round of the PGA Championship. As Koepka is talking, DeChambeau walks directly behind him, which prompts Koepka to close his eyes multiple times and deliver some eye rolls.

Koepka takes a pause and says “I lost my train of thought hearing that bulls-it.” It’s not exactly clear what or if DeChambeau even said anything, but something DeChambeau did clearly sent Koepka off.

Now, another video from PGA Championship week involving DeChambeau and Koepka has emerged. While this one isn’t nearly as exciting as the Koepka interview, it serves as a bit of foreshadowing of what was to come later in the week knowing what we know now.

During a practice round, a fan decided to chirp DeChambeau by calling him ‘Brooksy’ after a tee shot. DeChambeau heard the fan and said, “whoever is calling me Brooksy needs to get out of here.”

This fan was clearly trying to create a viral moment, and well, mission accomplished.

The drama between DeChambeau and Koepka really started at the 2019 Northern Trust Open when DeChambeau took an absurd amount of time over an 8-foot putt.

Koepka, not a fan of slow play, didn’t like it, and it was later reported that DeChambeau approached Koepka’s caddie at the event saying that if Koepka has a problem with his slow play, he should talk to him about it face-to-face.

The two have also shared their fair share of jabs on Twitter and then you have Koepka essentially accusing DeChambeau of using steroids in reference to his quick bulk-up after winning the 2020 Rocket Mortgage Classic.