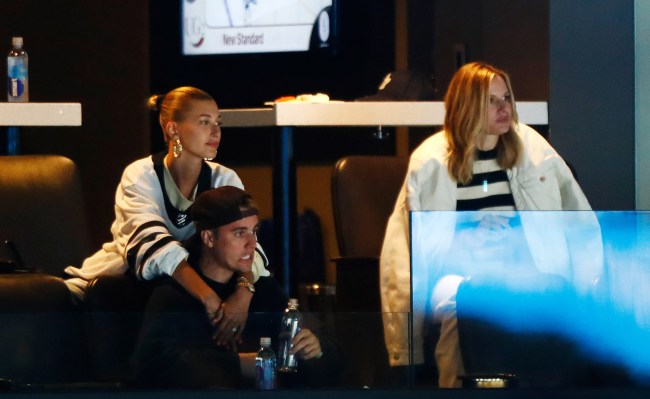 Man, if only celebrities would stay the hell away from attending Toronto Maple Leafs playoff games the team might actually have a shot at winning their first Stanley Cup since the 1966-67 NHL season. You know, back when the NHL still only had six teams.

First, we had Drake bringing his legendary bad mojo to Scotiabank Arena on Wednesday night for Game 4 of the series versus the Boston Bruins. Which, of course, as Alabama fans could have predicted, ended in the Leafs losing 6 to 4.

Then, lo and behold, who should show up to TD Garden in Boston on Tuesday for the deciding Game 7? None other than Drake’s number one competition for biggest sports cooler, Justin Bieber.

Of course, with this Drake-Bieber double-whammy, the Maple Leafs’ fate was secured, and the team was eliminated from the NHL Playoffs after losing to the Bruins 5 to 1.

Maple Leafs fans, as well as a few Bruins fans (and even one player, David Pastrnak), were more than aware that Bieber was in the house Tuesday night and had no problem expressing their thoughts regarding his presence.

Leafs are screwed. Bieber showed up.

Thank you @justinbieber for attending the #Leafs game tonight. 😉 pic.twitter.com/luikpwW9sH

And Justin Bieber who showed up tonight to root for the Leafs! He was at the Garden last year when the Bs won game 7. pic.twitter.com/88aPTVVBaR

I think Justin Bieber cursed the Leafs, not Drake. #HotTake

Justin Bieber and Hailey Baldwin in the house in Boston supporting the Leafs #curse pic.twitter.com/A5PMa9xkkY

I blame Justin Bieber for the leafs game 7 collapse.

For someone who claims to be a Leaf fan, you would think taking one for the team and not be at the game since the track record speaks for itself. @justinbieber

Oof that drake and Bieber curse is just TOO real, condolences to the leafs for the rest of forever

PUBLIC MUSING: I wonder if it is possible that Bieber nor Drake had very little do to with the Leafs losing.

Stop being so rational, people! Don’t you know how sports works? Sheesh!

Maybe if Drake and Bieber watched the Maple Leafs TOGETHER at the same time, then their curses would repel one another? You know, like when you try to put two magnets together the wrong way?