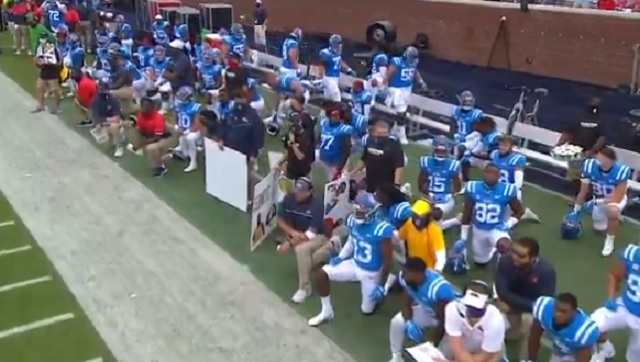 It didn’t seem like fans who attended today’s Florida-Ole Miss game appreciated the players who knelt on the field.

Before the game, members of both teams took a knee in unison for a “moment of unity’ to “acknowledge the unrest” in the country.

#OleMiss and #UF kneel together before the kickoff. Florida takes a delay of game. Ole Miss declines.

Here’s the statement from both teams on why they decided to kneel in unison.

As members of the Ole Miss and Florida football teams, we recognize the impact of our personal platforms and are choosing to amplify the issues that directly impact us,” Ole Miss released in a statement. “Together we have chosen to take the opening series of today’s competition to acknowledge the unrest in our country surrounding the treatment of African Americans. We will continue to support social justice efforts as members of the Southeastern Conference and members of our respective communities.”

First game for Florida & Ole Miss and players/coaches take knees and you can hear some boos from the crowd that didn’t get the memo to socially distance #Gators #Rebels pic.twitter.com/d4XuqwS1P5

Fans boo as players and coaches take a knee in Oxford #oleMiss pic.twitter.com/DwLnKfiiHi

And they got booed for it. Welcome to Mississippi in 2020. #OleMiss https://t.co/KrYsiUGosa

Of course there were boos when their team kneeled. Ole Miss going to Ole Miss #UFvsMISS

If I payed my hard earned money to go to a game and I had to wait through this, I'd be booing too. https://t.co/AG98lwDTnu