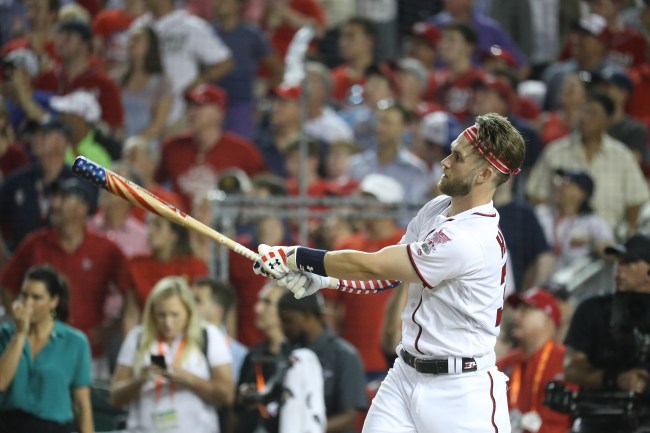 Last night’s Home Run Derby did not disappoint. Not only were we introduced to Bryce Harper’s dad, who looks he could body slam 2006 Jonah Hill, we also got to see Harper storm back to defeat Cubs’ slugger Kyle Schwarber 19-18 in bonus time in the nation’s capital. Extra time was given to Harper as a reward for hitting two homers at least 440 feet during the 4 minutes of regulation.

But, Harper’s win didn’t come without a bit of controversy. Some fans believe that Harper and his dad, Ron, cheated to edge out Schwarber by not letting each batted ball land before throwing the next pitch.

It's not over until @Bharper3407 says it's over. pic.twitter.com/UATq8M2ldV

So r we just ignoring the fact the Bryce Harper & his dad cheated & did not follow the rules of the #HomeRunDerby ? The previous hit ball must hit the ground before the next ball can be thrown to the batter. Harper needs 4 Home Runs taken away, video evidence. #Justice4Schwarber pic.twitter.com/u0B5FPAlfV

My absolute favorite thing in the world right now is Cubs fan home run derby truthers who believe the Harpers were cheating pic.twitter.com/F7QEvPt5pj

It's all fun and games, and it's nice that normally beleaguered Nationals fans get to go home from the #HRDerby happy…

…but we can all agree that Harper and his dad cheated, right?

The#Justice4Schwarber hashtag is picking up steam on social media and  a Change.org petition has been created in hopes to relinquish Harper of his Derby title and give it to its rightful owner, Kyle Schwarber.

At the time of me writing this, the petition has 146 signatures of its goal of 200.

I challenge anyone who claims that Bryce won unfairly to say it to his dad’s face.