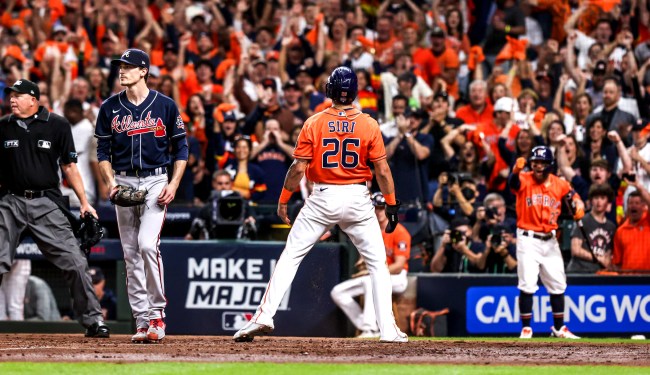 If you have ever wondered why teams like the Houston Astros would resort to cheating in order to make it to and win a World Series, all you need to see are the ticket prices and the cost of souvenirs put forth by the teams that make it that far.

On Tuesday, we reported about how Braves fans were sick over the outrageous prices being charged for tickets to World Series Game 3 in Atlanta.

As of Tuesday, the lowest ticket price on StubHub was $945… for standing room only. The best seats available were priced at $27,778. Let me repeat. One seat for World Series Game 3 at Truist Park in Atlanta was being sold for twenty seven thousand seven hundred and seventy eight dollars.

Normally those seats sell for $620.

#Astros #WorldSeries tickets 😂 These were in my Pop's baseball cabinet. Check out those prices! How times have changed! #ForTheH pic.twitter.com/NQlE8R7FQw

Apparently only the obscenely rich are allowed to attend the World Series these days.

Which means they shouldn’t have any trouble affording the ridiculously high prices being charged for souvenir World Series apparel while attending the games.

Senior MLB writer Ryan Fagan of The Sporting News was apparently one of the lucky ones who didn’t have to pay to go to one of the two World Series games in Houston, tweeted out a photo of a placard outside the gift shop at Minute Maid Park.

these teams make sooooooo much money on apparel … pic.twitter.com/ZhyHRvFLc4

The jacket you think is cool that day, then only wear to troll friends that hate your team. 🤣 My 07’ Giants Super Bowl hoodie knows this fate well.

Nice to see that the KIDS fleece is only $80. Great way to grow the game.

Jesus H. Christ... I'd immediately turn around...either that or head to the clearance section bitch about those prices too and then go pay $8 for nachos lol

I can’t wait for when half of this stuff will wind up at Ross or TJ Maxx for 50% off.

I guess when things like the line you see below happen, all bets are off when it comes to the prices pro sports teams are willing to charge for merch.

The moment the Astros won this was my local sporting goods stores (Academy) line for the apparel. Sold out-10 minutes! The line was around the block. The hunt is on! pic.twitter.com/uQHt77jsPn

Not that any of this should really surprise anyone. Not when we’ve seen the insane prices of things like the concessions at the new Seattle Kraken arena ($8 water, anyone?) and $14 popcorn at the Super Bowl.