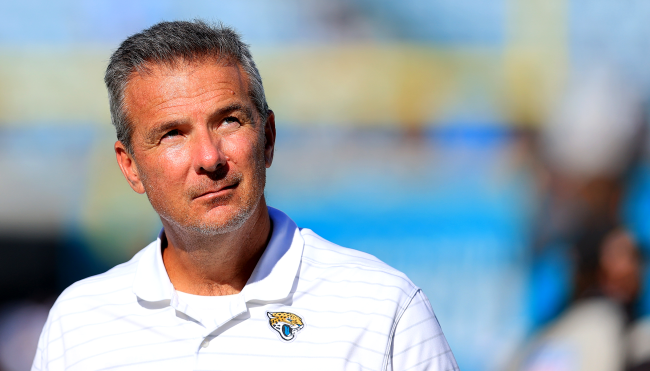 If you look up the definition of “in over his head” in the dictionary, there’s a very good chance that these days you will see a photo of Jacksonville Jaguars head coach Urban Meyer.

If Meyer hadn’t already lost the locker room after his viral lap dance video and subsequent apology that reportedly went over like a lead balloon, Trevor Lawrence inadvertently throwing him under the bus after Sunday’s loss that dropped the Jags to 0-5 may have done it.

Meyer said about the 4th and 1 play from the 1 “I don’t micromanage who is in the game.” pic.twitter.com/Vzdyn7QDqD

And if all of that doesn’t have every player in the Jacksonville Jaguars rolling their eyes anytime Urban Meyer says anything, the former college coach’s comments to the media on Monday certainly will.

According to Mark Long of the Associated Press, Urban Meyer told the media that his goal for the Jaguars’ offense is for them to average 250 yards passing and 250 rushing per game.

That’s a hell of a goal.

In fact, it’s such a hell of a goal, considering Meyers’ Jags are currently averaging 218 yards passing and 129 yards rushing per game.

Meyer does know he’s not coaching in college anymore, right?

Actually, even if he was still coaching in college it would still be a amazingly tall order to achieve those goals considering Ole Miss and Coastal Carolina are the only two teams in all of college to be averaging such numbers.

Needless to say, NFL fans were left gobsmacked by just how out of touch Meyer seems to be with the NFL game… again.

ah yes that very real and super not made up national league of football teams where teams in 2021 run the ball for 10 more yards a game than the 1936 Lions, the best rushing team in history — that passed for 800 yards *the whole season*

Nobody briefed him on how the NFL works❓

The only thing that could be worse right now for the Jaguars’ faithful would be if the team decided to hire Jeff Fisher to replace Urban Meyer. But they would NEVER do that, right?

Tony Dungy would be the perfect choice to get the Jags through 2021 and to then help find the right person for 2022. Others currently available and with plenty of NFL head-coaching experience include Jeff Fisher and Wade Phillips.