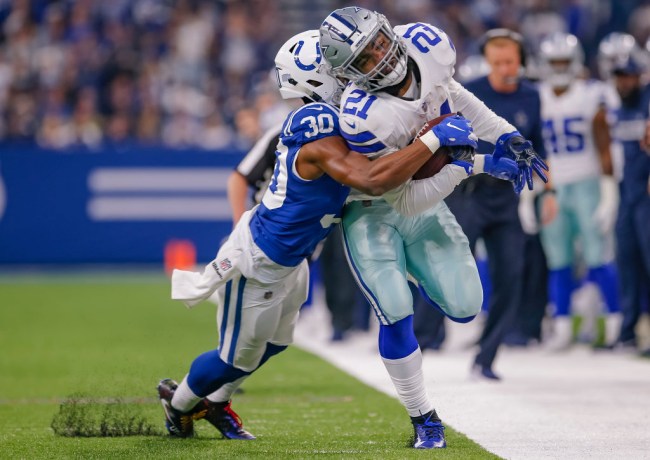 Imagine punching your ticket to your fantasy football championship after Sunday’s Cowboys/Colts game, talking so much shit that other members of your league are forming a secret mutiny to kick your gloating ass out of the league next year and replace you with Trent’s pissant little brother, and then have your dreams of fantasy football royalty ripped from your cold, lifeless hands.

That’s what happened to several fantasy owners after an Ezekiel Elliott fourth down play that resulted in a fumble got changed to a turnover on downs, and giving Zeke two points back while subtracting two from the Colts D.

Potential major fantasy implications on a stat correction: the NFL ruled that Ezekiel Elliott did NOT lose a fumble in Week 15. He gets two points back, likely swinging many matchups.

Another major stat correction with fantasy implications … Ezekiel Elliott did not lose a fumble against the Colts, and in turn the Colts D/ST lost points for a fumble recovery. The play happened on 4th down, so it was a simple change of possession and not a fumble lost.

The change caused an uproar on Twitter, with fantasy owners pointing fingers at platforms like ESPN, Yahoo!, CBS Sports for making the tardy ruling, but as ESPN’s Field Yates reports, stat corrections are handled by the NFL and distributed to these platforms on Wednesday and Thursday of each week.

That didn’t stop a bunch of depressed people from venting online about what could have been.

So I just lost my fantasy semi-final by less than 1 yard (0.04 points) because of the NFL making a stat correction of an Ezekiel Elliott fumble 😐 pic.twitter.com/crbSCU5c4B

So went from a crazy emotional 77-77 tie in the playoffs that had me advancing to the superbowl to a Thursday morning stat correction for Ezekiel Elliott's fumble that knocked me out of the chip a week after losing in another league playoff by 0.6 points. #ihatefantasyfootball pic.twitter.com/HCvNoeg2rN

Ezekiel Elliott stat correction knocks me out of the championship game. Yep, I might be done with fantasy football for awhile.

As they say, “One man’s trash is another’s treasure.” Props to the dudes who squeaked into their championships thanks to the technicality.

When you thought you missed the championship by .7 points pic.twitter.com/Qa7eUTDF9L