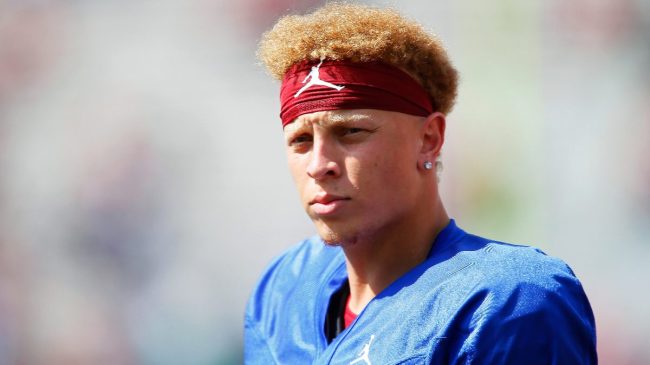 The South Carolina football team kicked off spring practice this week as they look to build upon last year’s seven-win campaign.

Shane Beamer and Co. surprised everyone in the head coach’s first season on the sidelines, doubling the projected win total and getting to a bowl game. South Carolina knocked off the likes of Auburn, Florida, and UNC, culminating with the Gamecocks’ first-year leader being doused in mayonnaise.

The South Carolina faithful is excited for the future of the football program.

Not only did the Gamecocks show massive improvements in 2021, they landed a ton of immediate playmakers over the offseason.

One of those performers is QB Spencer Rattler, who’s expected to take over under center for the South Carolina offense next year.

It’s not all been easy in getting the signal caller settled in South Carolina.

The Gamecocks fought off a number of high-profile programs to land Rattler’s commitment. Coaches have also had to defend their new star from the attacks of naysayers.

Rattler’s not listening to the outside noise, though, and is instead focusing on getting better.

South Carolina fans got their first glimpse of that hard work paying off with the opening of spring practice.

Rattler was front and center for the Gamecocks’ opening practice. All eyes were on the transfer signal caller as everyone is eager to see just what the team will look like under his leadership.

Here's about 1:40 of Spencer Rattler letting it rip at South Carolina's first spring practice this morning.

Full footage from Spencer Rattler’s first practice as a #Gamecock this morning. More on @GamecockCentral. pic.twitter.com/caaIIlPYRg

Here's a minute & a half of new @GamecockFB QB Spencer Rattler (@SpencerRattler) from Spring practice No. 1 today.

South Carolina will continue practicing through the spring before participating in the annual Spring Game this April. Before we know it, the college football season will be here.

The Gamecocks are hoping that Rattler’s performance will give them a boost in the uber-competitive SEC.