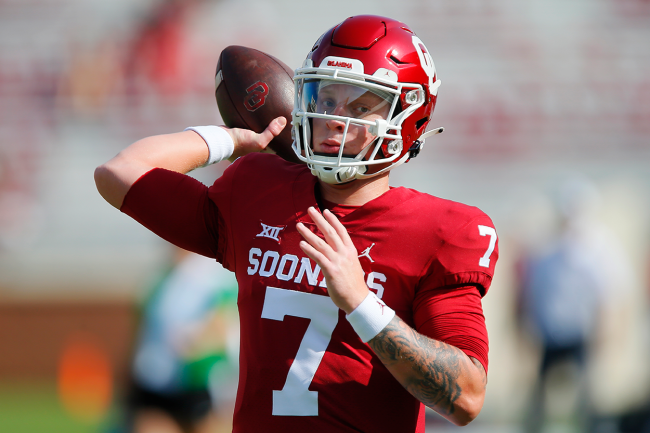 Spencer Rattler has officially been at South Carolina for exactly one month. The 21-year-old quarterback entered the transfer portal in the offseason, committed to the Gamecocks in December and arrived on campus at the beginning of February.

Since getting his feet on the ground in Columbia, Rattler has impressed the coaching staff with his leadership. He has also been putting in work to get stronger and faster before spring practice begins on March 16th.

According to Rattler, his new routine and diet has already paid off. He spoke with the media for the first time since his arrival at South Carolina on Wednesday and said that he has already seen dividends in terms of his frame.

Last season, at Oklahoma, Rattler was listed at 6-foot-1, and (a slightly embellished) 205 pounds. He says that he is aiming to play this fall around 215 and is well on his way.

“The nutrition staff is great here. Kristen does a great job here. Since I have been here, I have put on about eight to ten pounds. I have hit 210 already. Being in that 210-215 range during the season will be enough armor for me. They do a great job. We have great food up here. We have a great staff cooking meals for you. You can’t go hungry down here that is for sure.”

With the NFL Draft on his mind in 2023, extra strength and a greater knowledge of the game will be of great benefit.

In addition to his bigger frame, Rattler said that he is learning a lot about how to play on the next level from his new offensive coordinator Marcus Satterfield. Satterfield runs a pro-style system that was a big part of bringing the former Oklahoma starter to the SEC.

“The system definitely levels a pro-style system. I am learning a lot of new things every day. Terminology and verbiage that I didn’t know coming in. Coach Satterfield and Coach Coleman have done a great job with me so far. I have learned probably more in a month than I have in my college career. With these pro-style systems and the film we are watching, I think it elevates everybody’s games on the team. Mentally and physically on the field.”

It sounds like Rattler has a new outlook on the game at his new program. He is quick to dispel any narrative about attitude concerns and has already cashed-in on some lucrative NIL deals.

The only question now is whether Rattler will win the quarterback battle at South Carolina — (he will) — and if his play in 2022 can propel him back to the top of draft boards come next April.