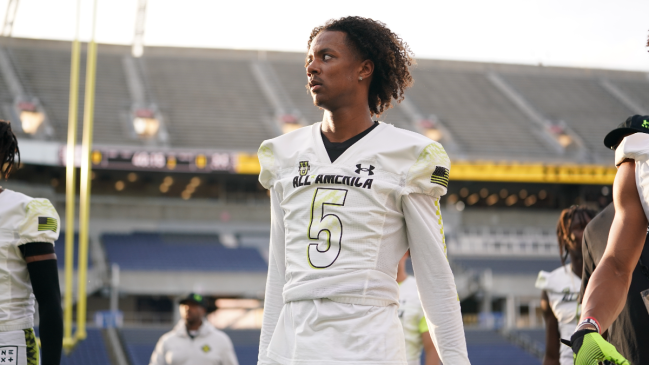 Rashada is one of the top high school quarterbacks in the nation in the class of 2022. He had scholarship offers from across the country and lucrative NIL deals on the table.

After first pledging his commitment to the Miami Hurricanes, Rashada later flipped that commitment to in-state rival Florida. As many expected, the highly publicized flip involved name, image and likeness deals that far exceeded $1 million.

In fact, reports have since suggested that Gators representatives offered Rashada a deal worth up to $13 million to sign the university.

Ultimately, that’s what Rashada did. But things fell apart when the proposed $13 million deal never came to fruition. Rashada then asked out of his national letter of intent with Florida in order to pursue options elsewhere.

The saga came to a fitting end on Friday morning.

While Rashada and the Gators tried to work through their differences, ultimately it proved impossible. Florida released the quarterback from his letter of intent on Friday morning according to On3 Sports.

Rashada verbally requested to be released from his NLI last week. He officially filed the paperwork for the release on Tuesday night. Now that the request has been granted, he is released from any binding ties to Florida and becomes the top unsigned quarterback in the 2023 cycle.

The report also states that a number of suitors have already entered the race for Rashada’s signature, including Deion Sanders and the Colorado Buffaloes.

Where the quarterback goes next is not easy to predict. Arizona State, Colorado, Cal and Washington all appear to be in the mix. After two misses in his recruitment in the state of Florida, staying near home on the West Coast would make sense.

With Coach Prime in the mix, an already crazy recruiting could be about to take yet another step up.