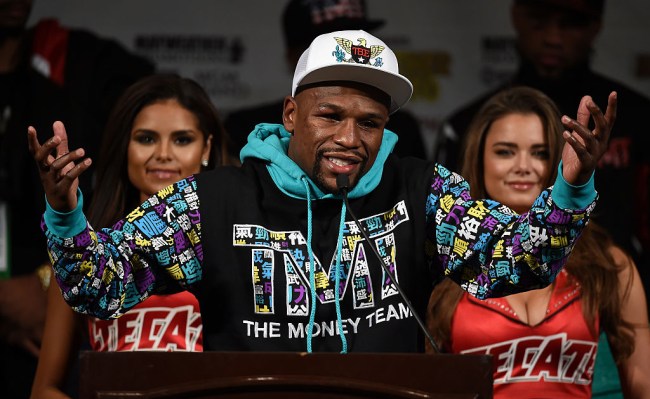 This week Floyd Mayweather, for some reason, appeared on a show called Awkward Puppets where he, uh, was interviewed by a puppet named Diego. I guess he had nothing better going on now that he’s all retired and set for life financially.

Anyway, during the interview, which took place outside of his strip club, of course, Mayweather revealed some details about his life that many of us had not heard before. One of those details was just exactly how many different girlfriends he currently has. The answer is almost as many as the number of world titles he has won.

When Diego asked if Money has a girlfriend, Mayweather replied, “How many women I have? Probably about seven deep. Lucky seven. We go out to eat, some of us travel together. Having one is too close to having none.”

Having one is too close to having none. Words to live by.

At least we know he can certainly afford to keep them all very entertained.

When Diego, who says he is married, asked Mayweather if he had any advice for him, Floyd shouted, “Get fuckin’ divorced.”

As for whether he will ever fight again, the answer is most definitely no. “The last fight that I fought, that was the money fight,” explained Mayweather. “For real, because the next fight, they’re going to try and get me to fight an alien on another planet.”

When Diego asked Mayweather how much money he had, Floyd said that he has several bank accounts. When pressed by the puppet (can’t believe I wrote that), Mayweather admitted, “$200million, $300million, yeah. In different accounts.”

Floyd also revealed that he has 25 cars in Las Vegas alone, including a red Bugatti and a yellow Ferrari.

What a life this guy leads, huh?