Floyd Mayweather Jr. Literally Laughed Out Loud When Asked About A Potential Rematch With Conor McGregor 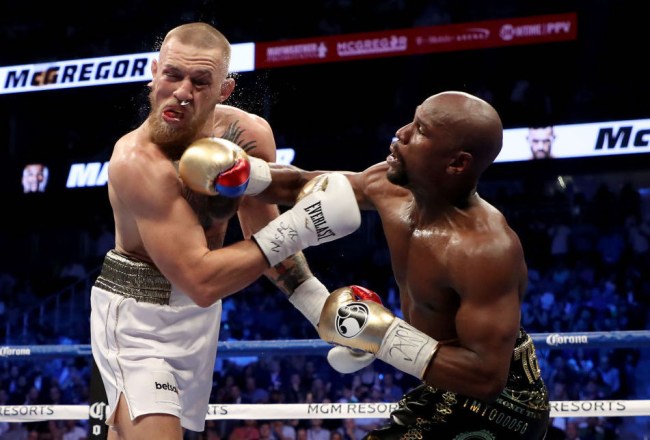 It’s been almost two years since Floyd Mayweather Jr. and Conor McGregor faced off in what was easily the most highly anticipated boxing match in recent memory and people around the world shelled out upwards of $100 for the privilege of having the stream cut out minutes before the fight began.

Nobody really expected McGregor to win and the fighter lived up to those expectations by opting to rely on the unconventional strategy of allowing himself to get repeatedly punched in the face until Mayweather scored the TKO in the 10th round.

Despite getting his ass handily handed to him, it didn’t take long for the Irishman to challenge the boxer to a rematch, and last year, it appeared there was a chance that the two men would face off again on McGregor’s home turf, as Mayweather said he’d only come out of retirement if the fight took place in the Octagon.

However, if you’re hoping to see them go head-to-head again, you might not want to hold your breath unless you’re looking to die prematurely.

TMZ recently caught up with Mayweather shortly after he had his ankles broken during a charity basketball game and asked him about the possibility of a second fight with McGregor, which caused the boxer and his crew to share a good chuckle.

Here’s what he had to say about McGregor and his camp:

“These kids are some circus clown. They can’t fuck with Money May. They gonna keep coming my way. At the end of the day, I keep laughing, I keep living, I keep going to the bank.”

McGregor hasn’t engaged in physical combat since getting his ass handed to him by Khabib Nurmagomedov last November, and while he’s also said he’d like a second chance with the Russian, it appears that’s not going to happen at any point in the near future.