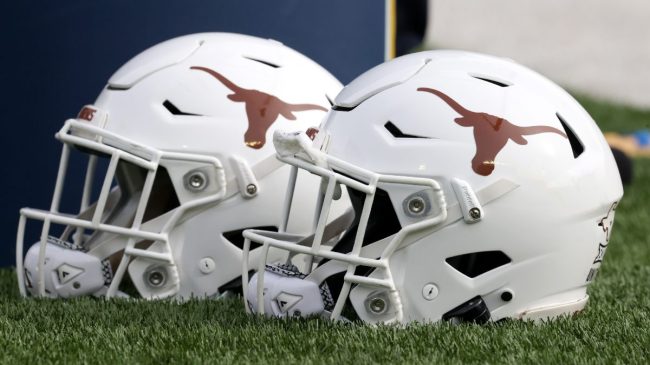 The Texas Longhorns are hoping to get back to their status as a college football power.

In the days of Vince Young and Mack Brown, the Longhorns were on top of the Big XII. The program won 10 or more games every year between 2001 and 2009. They reached the apex of the sport with a national title in the 2005-06 season.

Since then, though, Texas has seen a steep decline.

Over the last 12 seasons, the Longhorns have posted just one double digit win total. They’ve recorded more seasons under .500 (4), including last year’s 5-7 campaign. The program is on its fourth coach in less than a decade and has been forced to stand on the sidelines while rival Oklahoma competes for championships.

And, boy, do people like to see the Longhorns struggle.

As a result, the “Horns Down” symbol has become an NCAA staple, across all sports. Enough to where the Big XII is enforcing penalties to players that flash it as a celebration.

Texas is one of the most storied programs in college football, posting top 10 totals in all-time wins and winning percentage. But when there’s an opportunity to take a jab at the Longhorns, most enjoy doing it.

One of those occasions arose on social media this week following an unofficial visit from four-star WR Johntay Cook. The wideout was touring the Austin campus when he took a look at the Texas trophy case.

While it was stocked full of championships, Cook had trouble finding the football titles. Take a look.

Class of 23 4* WR Johntay Cook points out that all Texas has in their trophy case are swimming trophies 😂😂 pic.twitter.com/hiNBZR8wsB

“All they got is swimming trophies, no football trophies.”

According to the University of Texas athletics website, the Longhorns actually have 24 swimming and diving titles between their men’s and women’s programs.

The football program, meanwhile, has four championships with just one coming in the last 50 years.

Cook is considering Texas as one of the top five schools in his recruitment. Maybe he’ll choose the Longhorns in an attempt to add a few football trophies to that case over the next four years.