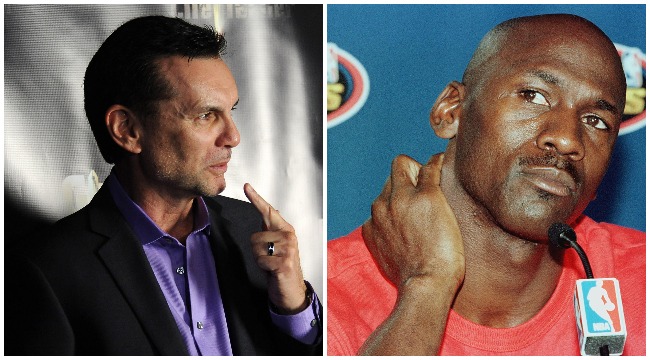 One of the greatest advantages Michael Jordan benefitted from in his career is that he played in the pre-social media age. Who knows how the MJ gambling addiction narrative would have played in a time when people consider it their God-given right to know everything about everyone. Jordan’s personal brand thrived off mystique, a luxury modern-day icons go without. This is why everyone has seen Draymond Green’s dick.

Michael Franzese, former New York mobster and captain of the Colombo crime family, is one of the few who witnessed first-hand MJ’s appetite for gambling. Franzese, who in 1986 made Fortune Magazine’s list of Fifty Most Wealthy and Powerful Mafia Bosses, had close relations with several athletes who were gambling at his establishments and also provided security services for companies and events, which is how he met Michael Jordan.

In an appearance on Mike Tyson’s Hotboxin podcast in April, Franzese described witnessing just how ferocious MJ could be when it came to winning and money.

“I love Jordan, to me, he is still the all-time favorite basketball player, but we were once in a security meeting with the NBA. Michael was playing the head of security in table tennis for five bucks. Of course, Michael wins, he wins at everything. So Horace has his warm-up suit on, and Michael goes where are my five bucks. He said that it’s up in his room, so he goes up and tells him to go out to get it.”

“Horace looked at him and said, five bucks Michael. He said yeah, this is my trophy, I beat you. He puts it in his pocket and walks away. I said, wow, this is intense.”

One of the dirtiest conspiracies tied to Jordan’s gambling plight is whether the mafia or drug organization killed Michael Jordan’s father, James, due to his son’s unpaid gambling debts.

The former mob boss appeared on Vlad TV to lend credibility to this narrative.

“I don’t have first-hand knowledge of this, but being as I was working with the NBA at that time, I was told two things:

One, he was told to leave the NBA around the time his father got murdered, because stories were about to come out and there was a lot of heat on the fact on the fact that because of Michael’s gambling habit, his father paid the price. And the NBA didn’t want the press, so they asked him to leave for a while, and that’s when he went to play baseball. And then when things settled down he came back. The plan was always, from what I was told, for him to come back.

I heard this from a source who was pretty knowledgable, somebody I knew pretty well inside the NBA.”

During the murder trial in 1996, convicted murderer Daniel Green dubbed his co-defendant, Larry Demery, the trigger man. He then said something suspicious:

“He said you did it,” reporter Mark Roberts asked. “How do you feel about Larry Demery?”

Larry Demery is currently being considered for parole via the Mutual Agreement Parole Program.