Leonard Fournette On Playing With Brady: ‘For The First Time In My Life, I Really Have A Quarterback’ 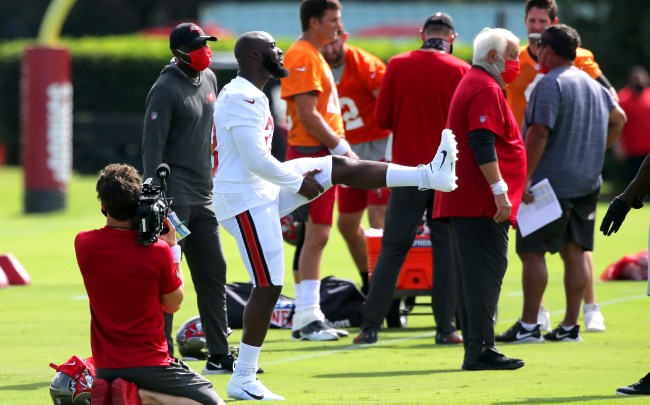 New Tampa Bay Buccaneers running back Leonard Fournette probably ruffled quite a few feathers during a media session on Tuesday when he said, “For the first time in my life, I really have a quarterback.”

After surprisingly being cut by the team that took him fourth overall in the 2017 NFL draft, the Jacksonville Jaguars, and signing a deal with the Tom Brady-led Bucs, the 25-year-old sounds like he’s happy with the move.

Fournette is entering his fourth season in the NFL after rushing for over 1,000 yards twice including 1,152 in 2019 with Jacksonville to go along with a career high 76 receptions.

While he may not be able to replicate those numbers in Tampa Bay who has a rather crowded backfield already with Ronald Jones II, LeSean McCoy and Ke’Shawn Vaughn, Fournette says he isn’t concerned about sitting third on the depth chart right now.

“I don’t really worry about expectations,” he said on Tuesday. “Football is football. I’ve been playing the same game for 25 years. I mean, for the first time in my life, I really have a quarterback. So that’s eye-opening for me.”

On the contrary, Fournette actually seems to be relishing the fact that he won’t be the focal point of the offense in Tampa.

“And not a lot of pressure is gonna come on me,” he added. “As far as game-planning and changing things, it’s great for me. I’m happy to be back there with one of the greatest, well, the greatest that’s played this game, and I get to learn from him too. My first two days here, I was sitting here talking to him about other defenses, what he expects, what I expect from him, you know our expectations because they’re high right now. But we have to start with each other on the team to understand each other and get a better communication before anything.”

#Bucs HC Bruce Arians says that Leonard Fournette will have a solid role in Week 1 against the Saints. He's a bright guy and he picked it up quickly today. Says obviously he can't do everything, it'll be situational.

Not exactly a Murderer’s Row of quarterbacks. No wonder Fournette’s so happy to now be playing alongside TB12. Opposing defenses finally won’t have free reign to stack the box with defenders against him.